Piers Morgan has been peddling his mantra of the U.S. being the “wild west” in terms of gun violence, and continues to make the point that the U.S. has a relatively high number of gun related deaths compared to Great Britain (GB).  In literal numbers, yes, the U.S., with its Second Amendment, and roughly six fold greater population (316 million in the U.S. vs. about 51 million in England excluding Scotland, Wales and N. Ireland; about 60 million with them included), demonstrates a higher level of gun related deaths, about 210 to 30,364, adjusted for population in 2009.  Of course, with a virtually complete gun ban, one wonders how those gun related deaths occurred at all, given that GB is a relatively small island with a fifth of the U.S. population and no open borders.  But I digress.

Let’s use the liberal’s own logic to examine this: has disarming the population of GB made their citizens safer?  According to a Gallup poll taken in 2006 (the most recent they have on the subject), the overall crime rate is lower in the U.S. than GB (or Canada).  Of course, the public perception is that crime is on the increase has risen, despite sharp declines in U.S. violent crime rates.  It is my considered opinion that the overly sensational coverage of crime by the media is responsible for this.

Actually, in GB, since 1997, when the Labour Party took control and the Firearms Act of 1997 was enacted, effectively disarming the British public, there has been a 77 per cent increase in murders, robberies, assaults and sexual offenses.  As a historical note, this bill passed as a result of the “Snowdrop Petition” that was generated as a result of 16 children being shot in Dunblane.  Sound familiar?  As Rahm Emmanuel put it:

You never want a serious crisis to go to waste. And what I mean by that is an opportunity to do things you think you could not do before.

As a result of “doing things they couldn’t do before”, British citizens have no means of defending themselves against gangs of knife wielding thugs, and even if they did, the government is in the practice of prosecuting the victim, not the perpetrator.  Criminals see gun free zones, or countries in this case, as welcome mats.  Places where people can defend themselves, not so much.  To pop the liberal balloon that says more guns equals more crime, if you actually look at the statistics, in GB and Chicago, after similar gun bans, homicides continued to increase (with a bit of a spike in GB after 1997, coincidentally), while in places like Washington DC, Florida and Texas, when right to carry laws became effective, murder rates continued a sharp decline or actually increased the decline.  Where is all the “wild west” gun play that liberals like Piers Morgan pontificate about?  Where it has always been: in their minds.  That and Hollywood.

The figure that really counts in this discussion, and is rarely if ever used by the media, is the rate of violent crime per 100K people.  In GB, this important figure is over 2000/100K, while in the U.S., the rate is 466/100K.  That’s right, less than one quarter of the British number.  Now honestly, given the facts, where would you feel safer walking on a dark street at night, GB or the U.S.?  If an assailant is in front of you with a baseball bat, demanding your money, will you feel better that he doesn’t have a gun?  Want to bet that a major contributor to our significantly lower rate of violent crime compared to GB is because we still have the right to defend ourselves with a weapon?

Where do we turn to find a historically based, sound defense of the Second Amendment and the right to arm oneself in self defense?  Oddly enough, Pravda, which has become a more reliable news source than most of our self proclaimed “important” media.  In an article published shortly after the Newtown murders, one Stanislav Mushin commented as follows:

For those of us fighting for our traditional rights, the US 2nd Amendment is a rare light in an ever darkening room.  Governments will use the excuse of trying to protect the people from maniacs and crime, but are in reality, it is the bureaucrats protecting their power and position. In all cases where guns are banned, gun crime continues and often increases.  As for maniacs, be it nuts with cars (NYC, Chapel Hill NC), swords (Japan), knives (China) or homemade bombs (everywhere), insane people strike.  They throw acid (Pakistan, UK), they throw fire bombs (France), they attack.  What is worse, is, that the best way to stop a maniac is not psychology or jail or “talking to them”, it is a bullet in the head, that is why they are a maniac, because they are incapable of living in reality or stopping themselves.

The excuse that people will start shooting each other is also plain and silly.  So it is our politicians saying that our society is full of incapable adolescents who can never be trusted?  Then, please explain how we can trust them or the police, who themselves grew up and came from the same culture?

From his lips to a politician’s deaf ear.  Deranged or fanatical people will always find a way to vent their violence on innocents; they just are less inclined to do so when the innocents can defend themselves.  Let’s not repeat Britain’s mistakes.

Last but not least, maybe the only people we need to fear with guns are the very people that publicly rail against gun ownership.  Case in point: on CNN Piers Morgan and his liberal peanut gallery “joked” about shooting talk show host Alex Jones, who cleaned Morgan’s clock on a gun ownership debate on a previous night.  Now why would they feel the need to “joke” in the very vernacular that would get a conservative roundly criticized (along with the requisite accusations of being crazy)?  To demonstrate that this is the common thought among liberals, just look at the Twitter comments that follow the video in that piece.  See any peaceniks, or do you see near sociopathic commentary by drooling, slack jawed, liberal anti gun nuts?  Why are the self appointed guardians of the public peace so violent?

Ed Morrissey over at Hot Air just posted about how Twitter may well be eating itself since some users are abusing the report spam and abuse buttons and are beginning to target conservatives with the hope of forcing the application to automatically shut down accounts. Of course, eventually Twitter turns the account back on after a couple of days claiming the automatic process kicked in due to the high level of complaints.

END_OF_DOCUMENT_TOKEN_TO_BE_REPLACED

If you are not following me on Twitter you are missing what is and will be a weekend long rant on Malloy budget deal. Here is what i have up so far: 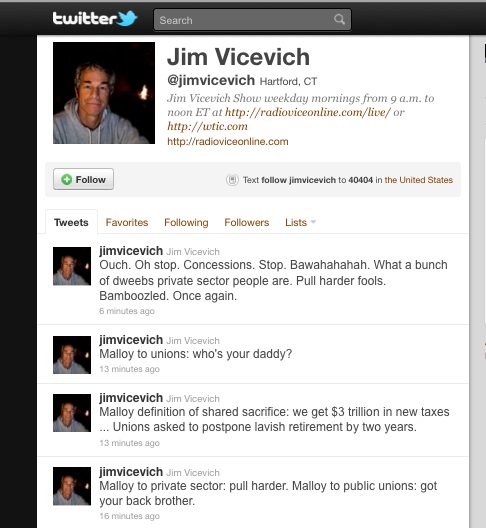 So, we have a racist sneak into documentary screened by a conservative group at McGill University in Montreal. The racist is not exactly a fan of the film, and starts live-Tweeting his thoughts during the presentation. The Tweets include specific threats to the audience.

END_OF_DOCUMENT_TOKEN_TO_BE_REPLACED

We now learn that the White House , though a private contractor, and without anyone’s knowledge, is collecting and storing comments made on it’s social networking sites at Facebook, Twitter, MySpace, Flickr, YouTube, Vimeo and Sideshare.  The truly amazing part though is that the President is pointing to federal law as his justification for these actions.

The Presidential Records Act provides that the president must maintain all documents:

“created or received by the president, his immediate staff or a unit or individual of the Executive Office of the President whose function is to advise and assist the president, in the course of conducting activities which relate to or have an effect upon the carrying out of the constitutional, statutory, or other official or ceremonial duties of the President.”

To me, there are several troubling aspects about what the White House is doing.

Second, anyone who posts a comment on, let’s say, the White House Facebook page, is not notified that their comments will be collected and archived.  The folks on the left were outraged that the Patriot Act allowed wiretapping of suspected terrorists without their knowledge.  I can only hope there is a similar outrage at collecting “speech” from ordinary Americans without their knowledge.  Or will the double standard most cherished by the far left rear its ugly head once again?

Third, what is being collected and archived are comments posted on a third party web site.  It seems a stretch to argue that this is some sort of “official correspondence  with the President”, such as writing a letter to the President, or going to the White House official web site would be.  But, at least with the latter two, you know your correspondence will be collected and archived.

And, finally, what happens with the information collected?  Who will have access to it, and why?  And, for what purpose will that information be used?

For those of you really into Web 2.0 social networking, I’ve created an account with Twitter and started doing some micro-blogging. You’ll see the “tweets” over in the right column just under the Recent Comments section.

Not exactly sure how long I will do this. I guess you can say that I’m in alpha or beta right now.