You are here: Home1 / class warfare

As I watched Fox News Sunday this past weekend, I almost fell off my chair during the “Is labor losing its clout?” segment, wherein Chris Wallace interviewed two representatives of public workers unions, Dennis Van Roekel, President of the National Education Association, and Thea Lee, Deputy Chief of Staff of the AFL-CIO. END_OF_DOCUMENT_TOKEN_TO_BE_REPLACED

Class warfare 101 as expressed by the main stream media. As someone who has actually owned an offshore bank account, I’m offended by the biased attack tossed at Gov. Mitt Romney concerning his own bank accounts in the Cayman Islands. (That is what it is all about right … being offended.) ABC News followed the normal attack line: rich people hide money in offshore accounts to reduce their tax burden and screw the Treasury.

Never mind their article is pure hogwash. The headline reads Romney Parks Millions in Cayman Islands, and that’s all most liberals and class-warfare clones will read right? The headline sets the tone and reinforces the narrative. Done deal. Not so fast … read on.

Although it is not apparent on his financial disclosure form, Mitt Romney has millions of dollars of his personal wealth in investment funds set up in the Cayman Islands, a notorious Caribbean tax haven.

A spokesperson for the Romney campaign says Romney follows all tax laws and he would pay the same in taxes regardless of where the funds are based.

It’s not apparent? He’s hiding it! And of course a spokesperson for Romney will say he follows the law!

“His personal finances are a poster child of what’s wrong with the American tax system,” said Jack Blum, a Washington lawyer who is an authority on tax enforcement and offshore banking.

On Tuesday, Romney disclosed that he has been paying a far lower percentage in taxes than most Americans, around 15 percent of his annual earnings.

Oh. My. God! Why is he paying a “far lower percentage” than most Americans? That rich bastard thief! Of course, nowhere in the article does Matthew Mosk, Brian Ross (surprise!) or Megan Chuchmach mention Romney paid the full rate at the time he first earned that money, that either equaled or exceeded the rate other Americans pay.

It’s the law, everyone pays 15 percent on capital gains. But that’s not fitting the narrative for ABC mouthpieces Mosk, Ross and Chuchmach, so they make up the following line.

Paying the lower rate? There is only one rate for investment income, and it’s 15 percent … exactly what Romney is paying. Liars … bull shit artists… Don’t trust any of them. These tax vehicles are created by Washington, D.C. insiders simply because we give them the power to do so. Then, when those Americans follow the law and pay their fair share – as completely and totally defined by the federal government – those same politicians who make the rules attack not only politician on the other side, but private citizens as well.

Romney campaign officials and those at Bain Capital tell ABC News that the purpose of setting up those accounts in the Cayman Islands is to help attract money from foreign investors, and that the accounts provide no tax advantage to American investors like Romney. Romney, the campaign said, has paid all U.S. taxes on income derived from those investments. …

So why even write the damn story?

Take back the power from the federal government. They are screwing everything up.

Let’s think back and compare speeches from all previous presidents and national leaders and compare them to President Obama. I agree with Daniel Henniger from the Wall Street Journal, this president is the “most embittered American president” evah.

END_OF_DOCUMENT_TOKEN_TO_BE_REPLACED

I read this story about the protest in front of AIG. Here is a link. As I view the images of the people in the street and the employees looking down at the crowd I am overcome with a feeling of sadness. I am struck with the notion that we have all been duped. We have all fallen for the “banana in the tailpipe.”

Everyone has been manipulated to focus your attention on these bonuses and to vilify the people that are accepting these bonuses. Put away your anger for a second and look what is happening to our country.

Barak Obama had an impromptu conversation with Joe Wurzelbacher, a plumber from Ohio. Wurzelbacher is living the American dream. He’s paying more and more taxes and he’s not happy about it. He asked Obama about his tax plan, “your new tax plan is going to tax me more, isn’t it”? Well of course Obama proclaimed. “I think when you spread the wealth around, it’s good for everybody.”

Author note: While I’m away from the computer, I’m republishing my top 20 posts from 2008 each afternoon. -Steve

So the government takes money from Joe plumber, redistributes that cash to other people so they have money to hire Joe plumber to do work, and the people end up paying Joe plumber a higher price for the work. That’s not trickle up, it’s trickle back.

Plenty of discussion about this exchange on the Internet the past few days. Scott Johnson over at Powerline (cool new look at their site) has a good post today.

Obama is speaking of the trickle up theory of the American left. They think that if you collect additional taxes from the rich (legalized theft) and redistribute it to the “less fortunate” in life, those who are less fortunate will have more money to spend with, in this case, a plumber named Joe from Ohio.

There are unintended consequences when “the rich” are ripped off, especially when they know they are paying more than their fair share in federal taxes already.

By raising taxes on Joe plumber, Jo plumber needs to make some choices. One solution is for Joe to raise prices to cover the excess taxes he has to pay. He may also lay off workers, cut benefits and/or slow expansion.

Many Americans are already paying much more than their fair share of federal income taxes. Johnson mentions the most recent tax data released by the IRS and I’ve cleaned up the IRS spreadsheet and put it into terms that are more manageable to understand.

Just how rich are you?

Many people have no idea how rich – or how poor – they are as compared to other American families. The following data is from the 2006 tax year and was derived from IRS data located here. The tax collected – just more than $1.02 trillion dollars – was only from individual federal returns and does not include business taxes. If you have a small business and fill out a Schedule C, my guess is that those tax dollars are included in this 2006 report.

What group do you fall into? To sum up the statistics…

There are a couple of things to consider here. First, many working couples in New York City or Hartford, Connecticut could easily be in the top 10 percent of wage earners if – as an example – one was a nurse and the other a cop.

What it comes down to is the top wage earners are already paying much more than their fair share, and it seems tax payers like Joe the plumber are catching on. Are you?

Others watching Obama try to explain his trickle up theory include Malkin, Hot Air and Vicevich.

Hah! Check out WealthSpreadTM. I can’t believe it’s not earned. Low in transfats, high in taxes. Low-Effort! Butter it up with Wealth and spread it around like you earned it! Made with 100% pure American taxpayer sweat. Endorsed by the cook fringe of the Democrat party. Patented blend to help improve standing in the polls. 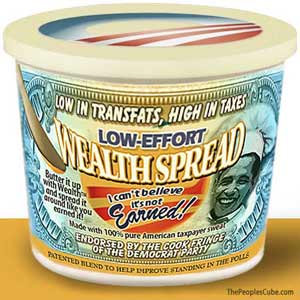 END_OF_DOCUMENT_TOKEN_TO_BE_REPLACED

Barak Obama had an impromptu conversation with Joe Wurzelbacher, a plumber from Ohio. Wurzelbacher is living the American dream. He’s paying more and more taxes and he’s not happy about it. He asked Obama about his tax plan, “your new tax plan is going to tax me more, isn’t it”? Well of course Obama proclaimed. “I think when you spread the wealth around, it’s good for everybody.”

So the government takes money from Joe plumber, redistributes that cash to other people so they have money to hire Joe plumber to do work, and the people end up paying Joe plumber a higher price for the work. That’s not trickle up, it’s trickle back.