First, let’s take a look at the total number of individual and family returns submitted between 1996 and 2005. The decade shows more than a 10 percent increase, from 120 million to 134 million returns. 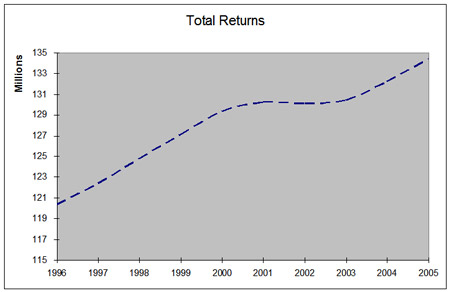 So what happened to the lower class who made between $15,000 and $30,000 per year? The chart below shows three groups. Although these charts are not indexed to inflation, the percentage of returns received in each group went down. 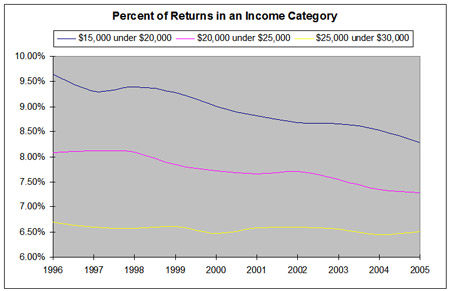 As an example, 11 percent of returns submitted in 1996 were from individuals and families with an adjusted gross income between $15,000 and $20,000. Ten years later, 8.6 percent – 2.4 percent less – were in that category. This spreadsheet shows that many filers in these groups moved out of their previous class and into higher income brackets.

The percentage of families in higher income categories – not shown in the charts but available in the spreadsheet – also more than doubled during the 10 year period. 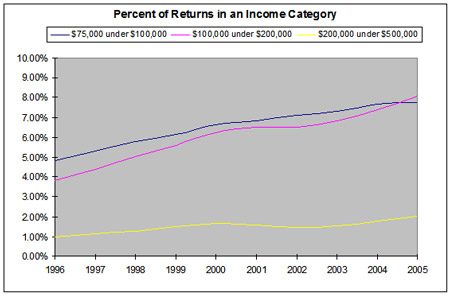 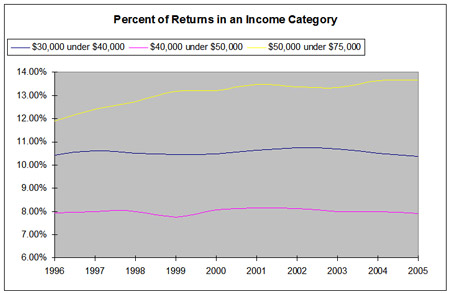 These results shows families and individuals are moving into higher income brackets; lower into middle or upper and middle into the upper classes. A rising tide does seem to float all boats.

How about taking a few moments to forward this post via e-mail to your friends and family?