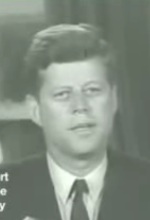 I would think, by now, everyone is aware of the fact that President John Kennedy was very much in favor of cutting taxes during the recession of 1962. He understood what so many now have seen (see Reagan) that tax cuts stimulate an economy and add to government revenue, not subtract. It is truly amazing to hear his words again during these trying times.

This video was brought to my attention by Steve McGough and asembled by the Winston Group. It comes to us via Americans for Tax Reform.

This is a proven way to boost an economy. A proven way to make it grow. When you continue to tax the means of production, you suck money from the market, reduce economic activity, from spending to innovation. You rob people of their freedom to create and business from its ability to expand. It becomes and economy where the government, not you or your business, remains in control. I detailed this in the post “Finally Cash for Clunkers for Business”.

Senator John Kerry does a good job of explaining it all here. Hard to believe Kennedy represented the same party as this fool.