Are you better off than you were four years ago? It’s a question asked at Obama campaign events, and I’ve been thinking about different ways one can answer the question. We can measure economic success a number of ways – housing costs, gas prices, energy bills, retirement account balances and net worth are all measurable, as is the most thought of indicator, income.

Another – more unique – indicator of economic success during the last four years would be federal tax revenue collected. If you’ve been listening to Obama and the main stream media, we’re in the midst of the worst economy since the Great Depression where corporations get undeserved tax breaks, and the middle class have been screwed. They say the Bush tax cuts have failed, but what’s really failed is fiscal responsibility. Revenue is way up, spending is out of control.

If we’re in a terribly bad economy, I have only one question. How the heck did this happen? 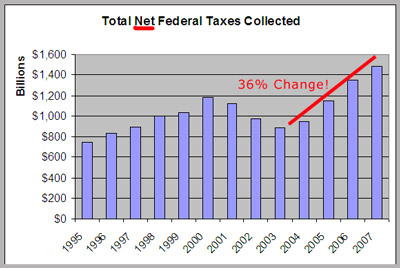 Yes, I do understand that many families are having a tough time, but to compare today’s economy to the Great Depression is just wrong. Ask those who lived through it.

O’Biden and company are lying. Democrats have been pulling this stunt for years. The rally calls soundgood, and voters seem to be smitten with not necessarily class warfare, but corporation warfare.

So, we know what’s happened to the total net collected, how about the amount collected from corporations? 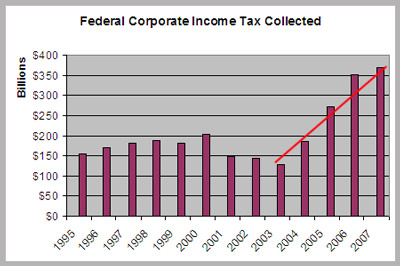 Well, it has doubled. In 2004, IRS data shows that the federal government collected about $185 billion from corporations and in 2007 the total grew 50 percent to more than $368 billion dollars. 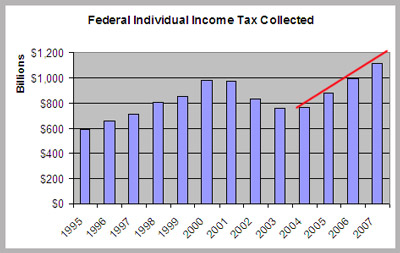 But what about the tax burden of individuals as compared to corporations? I’ve created a detailed spreadsheet with federal tax revenue information for 1995 through 2007, the most recent data available. This spreadsheet has two tabs, and in the second tab titled percentages, you’ll be able to see how the tax burden changes between the individual and the corporations.

If the federal government lowered taxes for everyone who paid taxes and still collected more money, it must be that we are doing better – when it comes to personal income – as compared to four, and even eight, years ago.

Finally, why are the rich being asked to be patriotic and pay more income taxes? Why are the successful always punished, while the federal government is never asked to do with less.

Note: You should research the data yourself. It was double sourced at a non-government Web site and IRS.gov. This Microsoft Excel spreadsheet – with two tabs – was created by the author to “clean up” the data provided at the IRS statistics Web site to make it more readable.

Limbaugh to pull out of New York