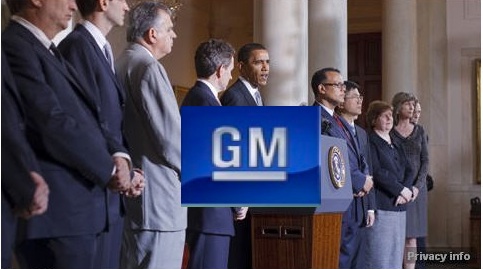 According to the Detroit News yesterday, the Treasury Department increased its estimate of government losses in the $85 billion auto bailout by another $170 million.

In the government’s latest report to Congress this month, the Treasury upped its estimate to $23.77 billion, up from $23.6 billion.

Last fall, the government dramatically boosted its forecast of losses on the rescues of General Motors Co., Chrysler Group LLC and their finance units from $14 billion to $23.6 billion.

And not just GM:

The government booked a $1.3 billion loss on its $12.5 billion bailout of Chrysler.

Why is this?  Well the government basically gambled on GM and Chrysler stock:

The Treasury, which initially held a 61 percent majority stake in GM, now holds a 26.5 percent share, or 500 million shares in GM. To break even, the government would need to average $53 per share for its remaining stake.

Well, that may have seemed like a good idea at the time, but GM is currently trading at under $25. What is that old adage about buying low and selling high? I might have worked for the UAW, whose jobs (and votes) Øbama sought to preserve, but the taxpayer is taking it on the chin once again.

Our “Fearless Leader”, Øbama said in the State of the Union address last week:

On the day I took office, our auto industry was on the verge of collapse. Some even said we should let it die. With a million jobs at stake, I refused to let that happen. In exchange for help, we demanded responsibility. We got workers and automakers to settle their differences. We got the industry to retool and restructure. Today, General Motors is back on top as the world’s number one automaker. Chrysler has grown faster in the U.S. than any major car company. Ford is investing billions in U.S. plants and factories. And together, the entire industry added nearly 160,000 jobs.

Øbama skims at the real reason he did this Chavez like takeover with the statement about “a million jobs at stake”, i.e. he was out to save union jobs (read it: likely Democrat voters), but the rest of it was pure fertilizer.  He has a lot of gall bringing up Ford, whose success has nothing to do with him, despite the not so subtle insinuation.

In a normal world, GM would have gone bankrupt, which it did anyway, not die.  It would have reorganized, stockholders would not have been stiffed, and the company would have shed decades of union dead weight.  Heck, cars might even have gotten a bit less expensive!  But no, our imperial leader, on an unending campaign run, chose to set aside normal business practice yet again, and apply his “vast economic knowledge” to the problem.  Did this self proclaimed genius even take an Economics course in college?  Who knows?  Like John Kerry’s military/medical records, we will never get to find out.

The taxpayer takes a bath, the unions get stronger, the company gets weaker, and Øbama preens himself with false credit.

Not just another bump in the road

How smart is Øbama anyhow?

Why don’t politicians have fundraisers for the country instead of themselves?

The President has “summoned”?
20 replies