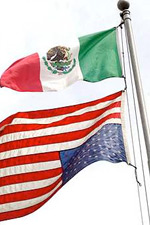 Last year, many Americans began to see the job-killing effect of this administration’s constant pandering to unions, and, it recently got worse.

To explain, let me take you back to 1993 when the U.S. Senate ratified NAFTA, the North American Free Trade Agreement. Under this treaty goods are supposed to move freely across the borders of Mexico, the U.S. and Canada.  In 1995, under pressure from the Teamsters, President Clinton banned Mexican trucks from carrying imports from Mexico into the United States.  In response, Mexico began negotiations with us…with no success…and, finally, in 2001 Mexico prevailed before a NAFTA “court”.  President Clinton’s ban did, in fact, violate NAFTA.

In 2007, President Bush “lifted” the ban on Mexican trucks transporting goods across our southern border.  The program was designed as a “test” for the purpose of determining the safety of Mexican trucks.  Even though the “test” determined that Mexican trucks were as safe as American trucks, one of the first things President Obama did as president was to abolish the test program established by President Bush.  Thus, we are, once again, in violation of NAFTA.

Mexico responded in March 2009 by putting tariffs of 10 percent to 45 percent on U.S. goods including vegetables, wine, juices, sunglasses and toothpaste.

imports [from the United States into Mexico on the list of products that had the newly imposed tariffs] dropped 81% in the first year after the tariffs were imposed in March,2009…

A few weeks ago, Mexico upped the ante.

Washington state apples and California oranges and pistachios…will now cost 20% more in Mexico than they did…Cheeses from California and Wisconsin now face a 25% tariff…  [Additionally, new tariffs have been placed on] pork, ketchup, chewing gum, grapefruit, chocolate and dried fruit… [while keeping the tariffs on] pears, apricots, cherries, peas, almonds, potatoes and wines.

American businesses, growers and workers are clearly hurt by these tariffs.  At a time when we cannot afford to lose any jobs in this country, we certainly don’t need self-inflicted job losses that are little more than a poorly disguised attempt to protect the Teamsters union.

Breaking – Marines stationed at US Embassy in Mexico injured in shooting