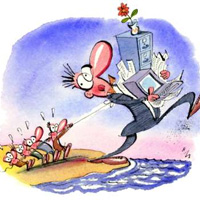 I’d like to use this news story as teachable moment. The Hartford Financial Services Group is planning to consolidate offices in a cost-saving measure that will move upwards of 900 employees out of its Southington, Conn. office. Is The Hartford outsourcing jobs to other cities and towns?

From the Hartford Courant.

The Hartford has been downsizing its presence in Southington since 2009 when it confirmed plans to close two offices on Executive Boulevard. In October, 2009, when The Hartford announced the closing of the second office, the company said it would have 900 employees remaining in Southington, mostly in sales and customer service.

Prior to the consolidation, about 2,000 of the insurer’s employees were located in Southington.

These are business decisions and thankfully there are no layoffs associated with the move. So all should be good right?

Well, my guess is businesses in Southington, who just two years ago provided 2,000 Hartford employees everything from dry-cleaning services to lunches might have something to be concerned about. Hopefully, these 2,000 vacated cubes will be filled by employees from other companies, but how much will the local economy suffer because of this move?

Should The Hartford be targeted by government bureaucrats for efforts to consolidate and/or move operations. Think about the Obama administration’s National Relations Labor Board (NRLB) and their recent attack on Boeing. Boeing hired more people in Seattle, expanded operations to South Carolina and hired even more people, and they get attacked by the government for doing so.

No, this story is not about outsourcing, but just like when a company elects to move offices or manufacturing plants to other states or other countries, this story is about business decisions that will help to keep costs as low as possible while still providing the expected level of service.

With today’s congress – is entrepreneurial spirit at risk?

It’s everyone else’s fault, and, I have a plan

Heads we lose, Tails they win…

Obama administration on ATF director’s status – Should he step ...
Scroll to top