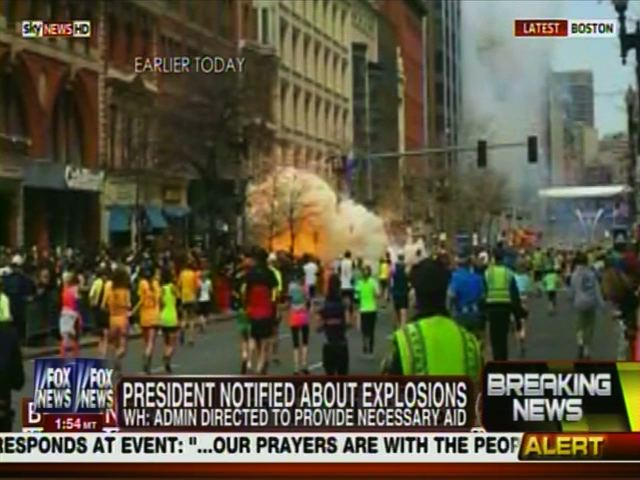 This afternoon, two bombs exploded on Boylston Street near the finish line of the Boston Marathon. What we know now is that two people were killed and twenty three people are injured.

The video is long, but very comprehensive.

As a result, security has been heightened in major cities throughout the world, including Washington D.C. where the section of Pennsylvania Avenue in front of the White House has been closed to traffic.

You can find more updates at Hot Air.

Update: (April 15 at 5:24 – Steve)
Keep in mind, that most of what you are hearing in the media will turn out to be incorrect information. It’s not on purpose, it’s just that people hear and interpret things differently. This is all breaking news.

New York Post is reporting 12 dead, and more than 50 injured

A federal law-enforcement source confirmed to The Post there are at least 12 dead. [Most report two dead.] Massachusetts General Hospital was treating 10 people with amputated limbs and all operating rooms were on hold, sources said.

[This was denied by the Boston Police Commissioner at 5:559 p.m. ET]

The Boston Globe reported that there were up to 100 injuries stemming from the explosion.

The following video is from the Boston Globe, sorry … it plays right away. Content warning.

Earlier today, I thought the timing was interesting. The bombs went off 4 hours and 9 minutes into the race, which is very close to the average time for finishers in recent years.