You are here: Home1 / taliban

No worries, we’re making them promise they will give up violence.

END_OF_DOCUMENT_TOKEN_TO_BE_REPLACED

While the United States and the State Department push for negotiations to continue between the Taliban and the Afghan government, we learn the Taliban and al-Qaida may still have a common goal in mind even though their operational planning may differ in approach.

END_OF_DOCUMENT_TOKEN_TO_BE_REPLACED

The outcry from conservatives was heard round the world. How could we and other NATO nations negotiate with the terrorist Taliban … knowing that handing them power would mean a certain haven for AQ and a terrorist state? Well, not to worry my friends … the US spent months talking with an …. impostor? Geeze. END_OF_DOCUMENT_TOKEN_TO_BE_REPLACED

During the last week, we’ve been writing about attempts by Secretary of State Hillary Clinton, the Afghan president and other leaders in London to buy off the Taliban with asylum, bribes and political positions. It may work in the United States, but Taliban leadership is not falling for it.

END_OF_DOCUMENT_TOKEN_TO_BE_REPLACED

Last week, I wrote about efforts to provide Taliban leaders asylum, political positions in the Afghan government and a “clean record” void of previous terrorist activities. Now the United States and Britain are considering a $1 billion ransom payment.

END_OF_DOCUMENT_TOKEN_TO_BE_REPLACED

When you’ve got an enemy supporting terrorism and – quit frankly – terrorizing people themselves, what can you do to get them to agree to peace? Why not offer them a fresh start in an other Muslim country with new identities?

END_OF_DOCUMENT_TOKEN_TO_BE_REPLACED

For those of you who keep bringing up the “fact” that President George W. Bush screwed up and missed bin Laden back in Tora Bora after Sept. 11, Uncle Jimbo over at Blackfive has a not so long ago history lesson for you.

END_OF_DOCUMENT_TOKEN_TO_BE_REPLACED

In March, Vice President Binden stated the United States and coalition forces would need to negotiate with the Taliban, since 70 percent were not all that bad and just in it for the money. The negotiations are not going well, with the Taliban refusing a power-sharing agreement in recent days.

END_OF_DOCUMENT_TOKEN_TO_BE_REPLACED

Shall we take a stroll back in time – not too far mind you – and look at who the Taliban are, what they do, and how they supported and encouraged al-Qaida terrorists in the past? No. President Obama is now giving up on those who harbor and support terrorists. To win it turns out, is probably not possible.

END_OF_DOCUMENT_TOKEN_TO_BE_REPLACED

We have identified the international issue that may haunt the Obama administration in the future. It’s the not-so-far-fetched possibility the Taliban – who have been migrating from Afghanistan into Pakistan – will soon have access to nuclear weapons. 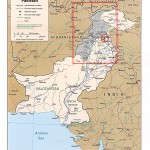 The negotiation for “peace” with Taliban leadership will be a devastating mistake. Within the past three months, the Pakistani government reached an agreement with the Taliban that allows them to uphold strict Islamic sharia law throughout a large portion of northwest Pakistan. But it is important to note the government has been giving up control of Pakistani land along the Afghanistan border for years.

The very crude (approximate) maps that I’ve tried to put together shows the Taliban in control of more than 15 percent of the country.

Now, we’ve got reports of Taliban monitoring and patrolling areas outside of the agreed territory. If you think Iran getting nuclear weapons would be a bad thing, how do you feel about the Taliban having the same – really more advanced – technology? From the AP, with my emphasis added.

ISLAMABAD – Taliban militants have extended their grip in northwestern Pakistan, pushing out from a valley where the government has agreed to impose Islamic law and patrolling villages as close as 60 miles from the capital. Police and officials appear to have fled as armed militants also broadcast radio sermons and spread fear in Buner district, just 60 miles from Islamabad, officials and witnesses said Wednesday. 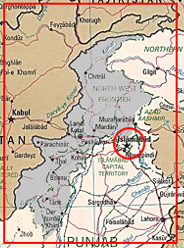 It started in mid-2006, and has been getting worse.

INTELLIGENCE ANALYSTS woke up on September 5 [2006] to unsettling news. The government of Pakistan, they learned, had entered into a peace agreement with the Taliban insurgency that essentially cedes authority in North Waziristan, the mountainous tribal region bordering Afghanistan, to the Taliban and al Qaeda. Just ten days later, the blow was compounded when the government of Pakistan released a large number of jihadists from prison. Together, these events may constitute the most significant development in the global war on terror in the past year–yet the media have taken little notice.

So, just what is the Taliban’s version of sharia law? Just to start…

So far, the Pakistani Taliban’s interpretation of sharia has included banning girls from school, forcing women inside and outlawing forms of entertainment.

Yeah, that’s going to go over really well, but it’s nothing considering the Taliban could get their hands on operable nuclear weapons within a few weeks if the country falls.

We need to be discussing this and not ignoring the obvious problem.

Update: Allah at Hot Air thinks it may be time to start freaking out about Pakistan.