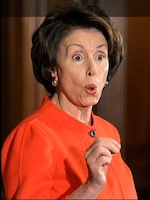 Hey, it’s not just Connecticut digging a moat to keep out Democrat leadership. This is just a little addendum to the top news post today.

It’s actually 3 days old (wow, the news cycle moves fast) but well worth watching I think. “I don’t work for Nancy Pelosi, or Harry Reid, or anyone else,” says Rep. Mike McIntyre, D-NC. “I work for you.” He goes on to say he voted against the “Wall Street bailouts, the auto bailouts, the energy tax.” Oh brother.

Jake Tapper, via Hot Air, has a great round up of the long list of Democrats making like John Droney, including campaign ads. Great stuff. A real snorter.

House Speaker Nancy Pelosi, D-Calif., called them her “majority makers” – the moderate to conservative Democrats in right-leaning districts whose election in 2006 made her Speaker.

And now many of them – and other Democrats in competitive districts — are fighting for their political lives in a harsh environment and have found it necessary to distance themselves from their leaders and Democratic policies.

You can almost hear them saying “Obama? I don’t know him. Never met him. Hey, when you run as the Messiah you can probably expect this kind of stuff.

Obama, Biden – new bank taxes will “get our money back”

Symptom of the Disease: I brought millions back to Arkansas – Vote for...