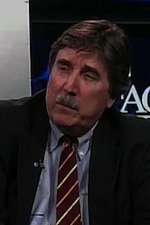 The former Chairman of Connecticut’s Democrat Party can read the handwriting on the wall … even in the second most liberal state in the nation. But I’m telling you folks, when he yanks the welcome mat, it’s more than just news.

This man is no small time Democrat Party hack. He’s well respected by Republicans and Democrats and I actually admire and like him very much. But he’s still a political animal, so while it may “shock and awe” the rest of the nation, not me. John Droney wants to win in November, and if that means throwing the President and the Speaker under the bus … beep, beep.

From today’s Face the State and Dennis House.

Mr Droney is what we conservatives used to call a “moderate” Democrat? I am not speaking for him, but I am sure he’s not happy with the way the Party has veered so “hard to port”. It makes his job tougher. But if I am wrong, so be it.

Still, this will tell you how far the mighty liberal statist agenda pushers have fallen if the President and the Speaker aren’t welcome in the a state where on a scale of 1 to 10, Connecticut is an 11.

But nothing here is surprising, is it? As AP notes too well, there’s a lot of this “running from the gang of three” going on these days.

No hard evidence here, just Politico reading the tea leaves, but it’s likelier true than false. The One’s been telling congressional Democrats for weeks that he’ll do whatever they want him to do to improve their chances in the fall, including staying away from their districts. If Blue Dogs making the odd joke about Pelosi falling down the stairs helps preserve a Democratic majority, hey.

Your thoughts? Does this mean the Democrats are in real trouble even in the “Constitution State”? Could it be I was actually on the money when I told Ed Morrissey a few weeks ago that I smell a Scott Brown upset here? Do I feel the earth moving under my feet? Or have I listened to too much Carole King in a lifetime?

UPDATE (Jim): Steve M inserted this in comments but it needs to be elevated. He asks the relevant question.

Less than 22 months ago, President Obama won Connecticut with 60.6 percent of the vote as compared to Sen. McCain (R) with 38.3 percent.

President Obama did win many more states with a higher percentage of the vote – including Illinois, Hawaii, Vermont and Massachusetts – and I’m wondering where he will be welcome to come campaign?

Excuse me, may we opt out of Obamacare?

Symptom of the Disease: I brought millions back to Arkansas – Vote for...
Scroll to top