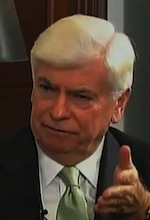 A. The Dodd-Frank Financial Reform Act.

Now that this bill has passed we can see what is in it as well.  And, one of its provisions is a bit a bit puzzling, given the stated purpose of the bill.

Under the new law, public companies using any of the four minerals from [parts of the Democratic Republic of Congo or neighboring countries] must report what steps they have taken to verify the minerals weren’t taxed or controlled by rebel groups.

Tin, tantalum and gold are used in many electronic devices including computers and televisions, and tungsten is used in ball point pens and drill bits.

Aside from the fact that the part of Africa where these minerals are mined changes hands from rebels to legitimate government almost on an hourly basis, there is an even bigger problem with compliance.  Many of our electronic devices are manufactured in China.  Can HP or Motorola, for example, ask China to verify the source of the minerals in their products made in China?  And, if they can, does anyone expect that China will actually track this data?

Although is is certainly laudable that our government is trying to stop the violence in this part of the world, what this provision is doing in the Dodd-Frank Financial Reform Act, will, no doubt, forever remain a mystery.

India buys a lot of gold

Do we still know the freedoms intended for us by the founding fathers? UPDATE: Thomas Sowell
12 replies

Calling all Giants fans … we need your help – Plus Video of roof...
Scroll to top