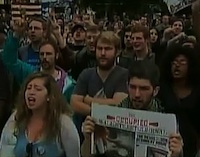 Many protesters in Occupy London chant, “All day, all week, we’ll sleep on London’s freezing streets. Solidarity”… well, maybe, not so much.

A hat tip, here to gillie, a frequent commentator on our blog, and a frequent visitor to the chatroom. Gillie, I hereby dub thee our RadioViceOnline foreign correspondent.  Gillie sent me this link today, and, you must view it as the photos are priceless.

It seems that Occupy London has decided to encamp outside St. Paul’s Cathedral to the point that last week St. Paul’s was forced to close.  This is the first time that St. Paul’s has closed since the Blitz, and, it may be closed for several more weeks until the protesters leave.

But, it seems that many of the protesters are leaving, at least at night when it is, well, cold.  An independent thermal imaging company took thermal images of the “camp” on Monday night and found that only 3 tents actually had any people in them.

You 53%ers should pay for the “peoples” college education

To occupiers blaming Wall Street: The major cause of the 2008 collapse is…
8 replies

Stimulus Medicaid money has run out

Let’s reduce the deficit by…
Scroll to top