One Wednesday, I wrote about the Obama administration’s plan to sunset the the D.C. Opportunity Scholarship Program – a federal initiative – that provided scholarships to kids.

After the kerfluffle of the Wall Street Journal piece, Education Secretary Arne Duncan proposed a solution. Let the kids who are already in the private system stay there, but cut off access for others. Nice.

What has not been noted, was President Obama’s flip-flopping statements on school voucher programs. In Feb. 2008, just one year ago, he was open to supporting them if they worked. From the New York Sun…

Senator Obama said this week that he is open to supporting private school vouchers if research shows they work.

“I will not allow my predispositions to stand in the way of making sure that our kids can learn,” Mr. Obama, who has previously said he opposes vouchers, said in a meeting with the editorial board of the Milwaukee Journal-Sentinel. “We’re losing several generations of kids, and something has to be done.”

Education analysts said Mr. Obama’s statement is the closest they have ever seen a Democratic presidential candidate come to embracing the idea of vouchers. Vouchers are taxpayer-funded scholarships that allow families to opt out of public school and use their government-allotted education dollars to attend a private school instead. They are despised by teachers unions, powerful players in Democratic politics.

By June, the NEA had reminded Obama about his previous statements – and the official 2007 NEA questionnaire – that led the organization to believe he was against voucher programs. So much for ensuring our kids can learn.

Here is a report from the Utah Education Association noting issues most important to NEA members. The number one reason, at least as listed in the PDF…

The NEA site, which no longer has the full questionnaire online, sums up the Obama and McCain stance on vouchers on their site. 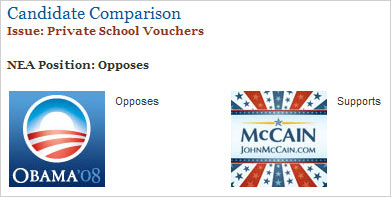 So he had to “revise” his statements from February. From Catholic.org.

The senator told ABC News last week: “We don’t have enough slots for every child to go into a parochial school or a private school. And what you would see is a huge drain of resources out of the public schools.”

A huge drain? Is he kidding me? The DC public school system spends an estimated $25,000 per kid and vouchers, in the case of the D.C. Opportunity Scholarship Program, are $7,500 per kid.

Obama is flat out owned by the National Education Association. They demand and he delivers, even if voucher programs work – and they do.

How can the Obama administration think these programs do not work?

Who cares when millions in donations come from NEA members. Gotta have the cash flow I guess.

Here is a snip from the AP story on the Education secretaries “clarification.”

Education Secretary Arne Duncan said Wednesday that poor children getting vouchers to attend private schools in the District of Columbia should be allowed to stay there, putting the Obama administration at odds with Democrats trying to end the program.

Duncan opposes vouchers, he said in an interview with The Associated Press. But he said Washington is a special case, and kids already in private schools on the public dime should be allowed to continue.

“I don’t think it makes sense to take kids out of a school where they’re happy and safe and satisfied and learning,” Duncan told said. “I think those kids need to stay in their school.”

Democrats in Congress have written a spending bill that would effectively end the program after next year. The bill says Congress and the city council would have to OK more money, which is unlikely.

The vouchers allowed some families to get their kids out of the D.C. public system and into private schools like Sidwell Friends.

Hat tip to Malkin for the heads up on Duncan’s statement.

The growing threat of Obama’s sequester “cuts” (Video) and Update