On Monday an organization known as Health Care for America Now (HCAN) sent 110 of its “followers” to protest outside the offices of UnitedHealth Group in Minnetonka, Minn. Their “peaceful” demonstration blocked the doors of the the building, and resulted in the arrest of six protesters. Tomorrow, HCAN plans a similar protest outside the offices of UnitedHealth Group in Hartford beginning at 4:30 p.m. How considerate of them to wait until that hour so that they can inconvenience as many innocent UnitedHealth employees as they possibly can. They will be there to protest in favor of including a public option in any health care reform bill. Here is what the Hartford office of UnitedHealth has told it’s employees:

UnitedHealth Group strongly supports health care reform and making coverage available to all Americans. As our nation continues to debate how to best modernize our health care system, we must be respectful of individuals’ varying perspectives on this important issue. On Thursday, Oct. 8 at 4:30 p.m., we are expecting a group to assemble outside our office to voice their views about the health insurance industry. While there may be rhetoric that attacks our industry and mischaracterizes our contribution to the health care system, we recognize that everyone has a right to express their opinion as long as it’s done respectfully.

There are two curious things about the HCAN protest. First, UnitedHealth Group has one of the best ratings of all insurers in the country, and actually declines payment of claims at a rate considerably less than our current public option, Medicare. So, if claims denial is their objection, the protest would be better suited at the doors of Medicare, not the doors of UnitedHealth. The chart below comes from the American Medical Associations own National Health Insurer 2008 Report Card.

And second, they are protesting because:

Health Care for America Now spokeswoman Nancy Gomez says lack of health insurance is associated with as many as 45-thousand deaths each year in the U.S.

UPDATE (Jim): Here’s a look at HCAN Hartford. I’ll bet this really scared United. Maybe 25 tops. As I said on the air today, they just flat out looked silly protesting, as insurance companies go, one of the more community conscious. One of the lowest denial rates and a company with its own children’s health care initiative. Geeze. Maybe that’s why this protest was such a dud. You just don’t get what you pay for these days. Click the pic if you care. 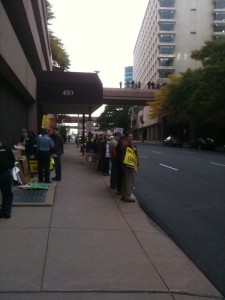 What’s not to like about socialized medicine? Update: Video
Obama: I should have “calibrated those words differently”
Remember the Cheney secret meetings with energy executives?
Obama suggests employer health care premiums will drop 3,000% – UPDATE: Heckled?
Obamacare: The politics
Government does not always have to “do something”
The New Welfare State – video added
Lindsey Graham: Who’s the dumbest Democrat
2 replies

RacismWhere were the rest of the doctors?
Scroll to top