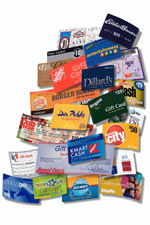 Last summer, New Jersey ammended the state’s Uniform Unclaimed Property Act, allowing the state to seize (steal) unused money on gift cards. The law was signed by Gov. Chris Christie (R-N.J.). In November, a judge temporarily struck down the law. How I missed this before, I just don’t know, as is a prime example of actions that would be considered criminal if done by a private party.

Gift cards may certainly be convenient for many, but I think they are a pain in the you-know-what. They can cause trouble for both merchants and customers who willingly enter into financial agreements. Cards can easily be lost by the customer, and the merchant has to figure out the accounting when a customer holds onto the card. Of course, you also have the issue with merchants going bankrupt.

Not to mention, you always end up having a 97 cent balance on that damn card…

New Jersey – like most other states – spelled out regulations concerning gift cards and gift certificates back in 2005 and 2006 when customers were complaining about fees and cards expiring. Those mean corporations got to keep the money after they expired, even though the terms were clear when the cards were purchased.

Well, the law in New Jersey that prohibited cards from expiring within two years and limited fees to protect consumers was not enough, especially after New Jersey found out they could scoop up almost $80 million a year in unclaimed property. This revision of the law steals from consumers.

On July 1, 2010, New Jersey passed a revision to the Uniform Unclaimed Property law stating that gift cards – which were not previously covered by the unclaimed property act – are presumed abandoned after two years. This includes paper gift certificates and rebates cards. The law also reduces the time to redeem travelers’ checks and money orders from 15 years to three years and seven years to three years, respectively. Finally, the law forbids fees charged on stored value cards and limits the amount of dormancy fees businesses can charge on travelers’ checks.

Got that? Since you have not used the card in more than two years, you obviously don’t need the funds. The other option would be the merchant gets to keep the funds per the agreement you had with the merchant. Well, the big, bad, evil companies certainly can not be allowed to keep the money!

So the state collects the funds as “unclaimed property” to support the collective.

Oh come on! What the heck gives the state the power to stick it’s nose into the transaction between private parties? If I leave a savings account dormant for a few years, at what point will the state deem the funds unclaimed property? I enter an agreement with a bank to have them hold my money in return for interest. Just because I don’t make any deposits or withdrawals for a few years certainly does not mean I’m OK with the state taking it in support of the collective good.

In November, a judge put a hold on the revisions made during the summer, and just today a few stories popped up indicating New Jersey’s state legislature was going to keep fighting to keep the cash for themselves. Mind you, this revision is not aimed at consumer protection. The clear goal is to steal money from consumers and businesses to keep it for the state, to spend on the needs of the collective.

These types of seizures are not new. In May of 2006, Connecticut’s attorney general – now Senator-elect Richard Blumenthal (D-Conn.) – felt the $6 million held by bottle distributors representing deposits you paid for bottles of soda and cans of beer belonged to “the people” (i.e. the government) and they stole it from the bottle distributors who were holding the funds in escrow.

I’m generally a fan of Gov. Christie, but I’m displeased – to say the least – that he signed the revision to the state’s unclaimed property legislation last summer. He needs to rethink his position and allow the judicial branch to kill the amended law.

Lie to New Jersey Gov. Christie … you goin’ down, down, down

Another Millionaire’s Tax – Don’t They Get It?

Obamacare and the new Congress UPDATE: Link to repeal bill
Scroll to top