Total hogwash. I was just reading about Joe Visconti (I) dropping out of the Connecticut governor’s race. He’s asking supporters to vote for Tom Foley (R) to avoid another four years of Gov. D.P. Malloy’s (D) running the state. At the end of the article, the Malloy campaign actually brought guns up.

So here we go…

Malloy campaign spokesman Mark Bergman released a statement Sunday saying: “Tom Foley just doubled down on his plans to repeal Connecticut’s strict smart gun law that has made our neighborhoods, our schools and our streets safer. Make no mistake, Tom Foley is in the pocket of the right wing extreme gun lobby and today’s announcement is further proof.”

Bull shit. The “smart” gun laws did nothing – and I mean NOTHING – to make our neighborhoods, schools or streets “safer.” I’d like to see any proof* at all from Bergman or the Malloy administration detailing how the new Connecticut gun laws reduced crime at all in the state? Let’s take a look at the new requirements and regulations.

The registration scheme is simply designed to stigmatize gun owners in an attempt to tell everyone the government has the power. The anti-gun crowd thinks owners need to be monitored. Of course, the one and only reason for registration is future confiscation. The government now has a list, and if you didn’t register, they have the ability to make you a felon in the future if they choose to. The bastards just want to hold this axe over your head, it’s as simple as that. Of course, registration of magazines and rifles did not stop one – NOT ONE – crime in Connecticut.

Also, you can no longer buy magazines that hold more than 10 rounds and you can’t buy some of the “evil black rifles.” Again, prove to me these new laws stopped even one crime in Connecticut. How does limiting people to 10 rounds lower the crime rate?

Don’t give me that “you only need 10-rounds” crap. I’ve proven 10 rounds may not be enough. Norwich police had less than a 15 percent hit rate when they shot and killed Michael Dugas in February, 2013. Seriously, they were only able to hit the suspect six times out of 41 shots fired. That shooting was justified. Seven officers were on the scene for many minutes negotiating with Dugas before they shot him in self-defense.

They also expanded the evil black rifle ban. Semi-auto rifles are rarely used during a crime, and Connecticut is no exception. Of course, there are still hundreds-of-thousands of these rifles that are still in Connecticut. Many registered, some not. If a criminal wants to get ahold of one, it’s easy to do. If a non-criminal non-resident wants to buy one out-of-state – and buy a bunch of 30 round magazines at the same time – and become a criminal in Connecticut, it’s super easy to do. Of course if the person was a criminal in the first place, it would be pretty easy too.

If you happen to own a Winchester Model 70 rifle you want to sell the gun to a hunting buddy you’ve known for 40 years, you can’t do that without going to the state for approval. You’ll have to pay a fee for that too. That’s the result of the Connecticut universal background check requirement. Of course, criminals don’t bother with background checks.

There is no way they can prove Connecticut is safer with these laws in place.

As a matter of fact, we already know that violent crime during the last two decades is down. Why anti-gun politicians don’t take credit for the huge reduction in overall violent crime is simple. They want even more control. Don’t like speaking in terms of decades? OK, let’s look specifically at violent crime per 100k, gun murders, robbery involving guns and aggravated assaults with a gun in Connecticut. All of this is from the FBI crime statistics, and I’m using the years 2006 through 2012 since we don’t have the completed 2013 report yet. 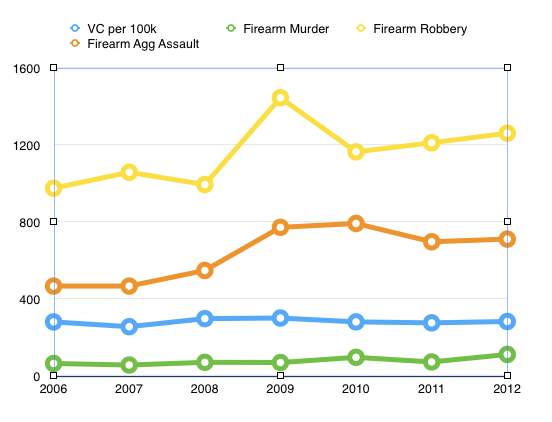 I’ve quoted FBI statistics before, and I’ve specifically discussed the hundreds of variables that can change crime statistics over time. It’s the reason I don’t site crime statistics in Chicago and point out the hypocrisy of their stupid guns laws that don’t work. The law is just one variable, and criminals don’t give a crap about the law. 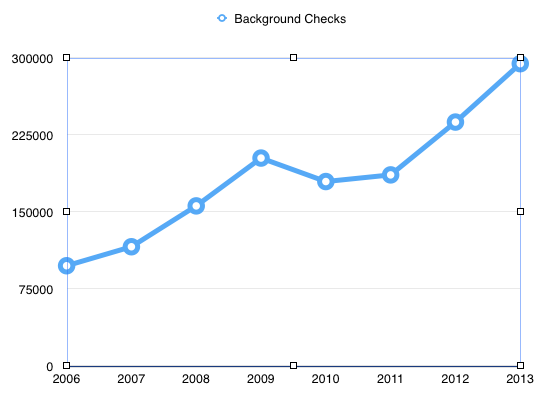 And overlaid on top of the previous chart. (I removed the 2013 background check numbers since we don’t have completed crime data for 2013.) 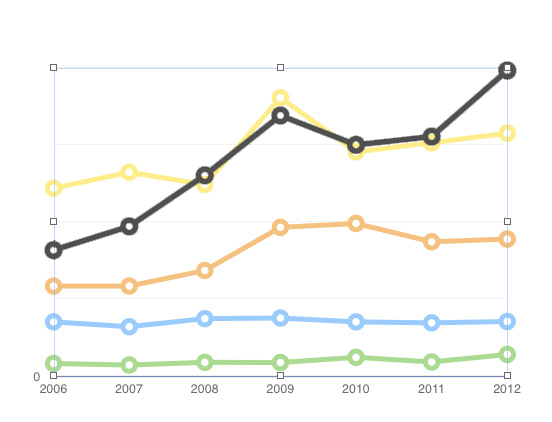 The number of background checks between 2006 and 2013 (seven total years of data) tripled – I say again TRIPLED – in the state of Connecticut. Violent crime remained flat. Firearm murders fluctuate and do not show a specific trend although they did jump in 2013 unfortunately due to the tragedy in Newtown. Yes. you can see a trending up line in other violent crime involving firearms in Connecticut, but it does not tell the complete story because of all of the variables.

Malloy is pandering to the low-information, ill-informed voting crowd in Connecticut when he claims the law is “obviously working.” One year does not make an obvious trend. He’s insulting our intelligence. Here are just a few of the other things that may have reduced the murder rate in Connecticut’s big cities in 2013.

None of that could be contributing or major factors as far as Malloy is concerned. It was all the new gun laws. Never mind good police work. Never mind the good work of community leaders. Never mind any of it…

* Yup, I understand I’m asking Malloy and the anti-gun crowd to “prove a negative” but I don’t care. They ask us to do this all the time.

Clinton actually tries to walk back her “businesses don’t create...