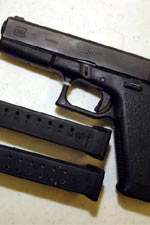 Gun control advocates and even former Vice President Dick Cheney have suggested having 10 rounds available in a magazine for a semi-automatic pistol “seems” like enough to protect oneself, yet the argument is simply an extension of a random number that “seems” to make people feel better and has no relation to real-world situations.

I’ve caught a few posts during the last week concerning the number of rounds a pistol magazine can hold. It’s an emotional issue for many, but limiting the magazine capacity of semi-automatic pistols would not make a difference, and could put those defending themselves in a more difficult situation.

Rick Green at the Hartford Courant has brought this subject up twice (here and here) within the last week mentioning he tried to get an answer from Sen. Dick Blumenthal (D-Conn.) concerning a proposed limit. Ed Morrisey at Hot Air posted just today referencing Cheney’s comment about the same.

In a Washington Post opinion piece from Jan. 12, Ruth Marcus attempts to highlight the “dangers” of high-capacity magazines and the concern of the anti-gun crowd. Since the “guns don’t kill people, people kill people” mantra has taken hold, the target now has expanded from the guns themselves to the ammunition.

For all the focus on weaponry, one of the most useful parts of the now-lapsed federal ban on assault weapons was that it prohibited the manufacture of magazines of more than 10 rounds. If the law, which expired in 2004, were still in effect, it would not stop crazed gunmen from inflicting damage, but it might limit the amount of damage they could inflict. 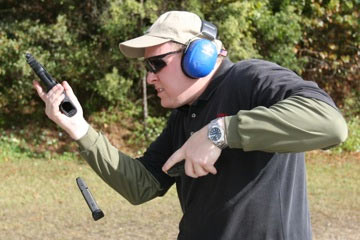 How Marcus determines the 10 round magazine limit was the “most useful” part of the federal ban we’ll never know since she provides absolutely no evidence the limit worked. As a matter of fact, one well-known horrific tragedy, the Columbine High School shooting that killed 12 and wounded 26, occurred in April of 1999, at the middle of the ban period. The tragedy still happened. Both standard capacity and high capacity magazines (10, 28, 32 and 52 round mags) were used at Columbine.

The shooter in the Virginia Tech massacre (post-ban)  who killed 32 and injured at least 18 more, used two weapons. One was a Glock 19 – the same as used in Tuscon – with standard capacity magazines. There is not much information on the subject, but some reports indicate he had as many as 17, 10 or 15 round magazines for the Glock. Virginia State Police confirmed they were not 17, 19 or 33 round magazines – those of which have been defined as dangerous by Marcus.

At VT, the shooter just carried more magazines, and some eye-witness reports suggest the shooter was reloading those magazines during the shooting.

There were two other laws in place that did not help at Virginia Tech. At the time, Virginia residents could only buy one pistol every 30 days (the shooter waited the month to buy the second gun) and the Virginia Tech campus was a gun free zone.

Marcus makes one other notable statement. Nothing like suggesting politicians ditch their “principles” to keep hold of a little power…

As a matter of political self-preservation, I would not advise Democrats to mount a full-scale push for new gun-control measures.

Other than for range session convenience and the normal “more is better” answer,  there are tactical reasons to carry magazines that can hold more than 10 rounds.

In stressful shooting situations, most studies show “hit rates” of less than 50 percent. A New York Times article from Dec. 2007 noted the hit rate for law enforcement in the city was 17.4 percent in 2005 and 28.3 percent in 2006. Los Angeles law enforcement shot placement was better than New York’s in 2006, with a 40 percent hit rate. Keep in mind these are law enforcement officers, who partake in regular training.

Civilians would be taking a more defensive posture, but the stress level is still there. In a situation where multiple attackers invade a home or attack someone on the street, it would be very reasonable to assume one defending himself or his family may run out of ammunition quickly if they were limited to a ten round magazine capacity. Certainly home invasions or attacks by multiple gun-toting criminals are rare, but mass shootings like Columbine and Tucson are even more rare.

Combine low hit rates in stressful situations with the fact one, two, three or even four rounds that hit the aggressor may not stop the threat, and you have a strong case to completely avoid a magazine capacity limit.

Of course civilians who train on a regular basis can be taught to exchange magazines in a very short period of time. Dropping the empty magazine and inserting a full magazine can easily be done in less than three or four seconds. I can’t imagine how stressful a shooting situation must be, but adding even more stress to the event by introducing a magazine change at a critical time could be life-threatening.

Keep in mind criminals can train too … and they don’t care too much about existing laws anyway. 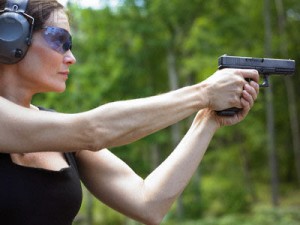 More information on the subject…

One last note concerning crime statistics. Anti-gun activists would like you to think the proliferation of pistol ownership and carry permits in the United States has resulted in a spike in violent gun-related crime and shooting deaths. Fortunately, they are totally wrong. Check out the FBI crime statistics for yourself.

Are you a female looking for information on self defense? Check out The Cornered Cat … it’s good for the guys too.

Update: Goodness grief. How come I write the gun posts that are logical and thought through, and Michael Moore talks metaphysical wondering why people are afraid and why they feel the need to carry a pistol for self defense if they live in nice neighborhoods and cities and he gets all the press? What makes him some sort of expert?

Of course, he eventually pulls the race card. Dana Loesch at Big Journalism has more.

Joe Biden has no clue concerning firearms – “Get a double barrel…”

Obama says look at excess regulation – How about calorie counts...

Classic: Who holds the 2010 Nobel Peace Prize winner in prison?
Scroll to top