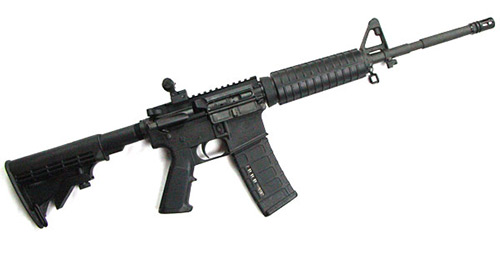 In an opinion piece published in the Hartford Courant today by Noah Feldman, a constitutional law professor at Harvard, Feldman outright states the 2nd Amendment does not include assault rifles. His reasoning comes down to this*, with my emphasis.

… there’s something special about weapons that can be used both for self-defense and for militias … those are the weapons that the men who ratified the Second Amendment had in mind.

Today, that includes handguns. But it doesn’t include assault rifles. They’re great for military purposes, and no doubt fun to shoot on the range. But they aren’t useful for self-defense, almost by definition.

I’m going to assume Feldman is using the now traditional gun-controler’s definition of an “assault weapon” including simple, semi-auto rifles and outright tell him he is wrong.

First, the government’s definition of an “assault weapon” has been changed and manipulated beyond belief. It started in 1994 – or before in some attempts at the state level – with the so-called Assault Weapons Ban that literally changed the definition for political purposes. They lumped in rifles with “special features” into the assault weapon category. You know… special deadly features like adjustable stocks (oh, the horror) and shoulder things that go up.

Prior to 1994 and after the 1934 National Firearms Act, the term was used in the government exclusively for certain military firearms that could be set to select fire or full auto. President Obama and many other gun control activists to this day lie, defining semi-automatics as fully automatic. They know the difference and are purposefully claiming “assault weapons” equal “machine guns” to ensure confusion. There is no other explanation other than “they are lying for political purposes, targeting people who know little about firearms.”

Oh, and there have been so few machine guns, sub-machine guns, or fully automatic firearms used in crimes, it’s almost immeasurable. But back to the topic at hand, Feldman’s claim…

But they aren’t useful for self-defense, almost by definition.

Again, wrong. In January 2013, the Department of Homeland Security put out a bid for a rifle to be used by law enforcement in the US that would be “suitable for personal defense use in close quarters…” The request for proposal is still available right here. I wrote about it in January of 2013. In short, Homeland Security stated the personal defense weapon of choice for law enforcement in close quarters was – in generic terms – an AR-15 capable of select fire (3-round burst) and full auto. Funny huh? And yet Feldman does not think the semi-auto version of the gun is useful for self-defense?

Don’t worry professor, I’m not done. Along with law enforcement all over the country pulling their semi-auto, select-fire (somewhat rare) and full-auto (very rare) rifles out of the racks or the trunk when they know they are going into a situation where they would have to defend themselves or others, in a majority of instances, it makes sense for these rifles to be used for home defense.

I’m certainly not saying this is the best choice for everyone, but here is a list of valid reasons I’ve written before, in no particular order.

Maybe, just maybe Feldman is confused about what rifles we are talking about here. Maybe he’s so illiterate about the subject he really thinks full-auto rifles are what we’re talking about? I’m not going to give him the benefit of the doubt, he’s a Harvard professor for goodness sakes.

* The Courant’s article is behind a paywall this morning. I excerpted the article above, but here is the three paragraphs I paraphrased.

That leaves the view that there’s something special about weapons that can be used both for self-defense and for militias. According to Scalia, those are the weapons that the men who ratified the Second Amendment had in mind.

Today, that includes handguns. But it doesn’t include assault rifles. They’re great for military purposes, and no doubt fun to shoot on the range. But they aren’t useful for self-defense, almost by definition.

It emerges that a careful, responsible originalist wouldn’t apply Second Amendment protection to weapons that aren’t simultaneously for self-protection and for hypothetical militias.

How About Knife Control?

“Safe” is a Relative Term [Updated]

The history of the 2nd Amendment
6 replies

Gun Control: Limiting the self-defense options of the law-abiding

The terrible impact of a multi-chance society
Scroll to top