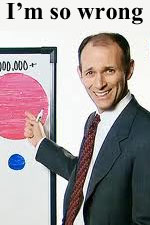 Austan Goolsbee is a con artist who is a professional at playing the class warfare card. Goolsbee, President Obama’s chair of the Council on Economic Advisors, created a White House video trying to get those of us who make less than $200,000 a year ticked off at the rich folk. Dan Mitchell picks Goolsbee apart point-by-point in a recent video from the Center for Freedom and Prosperity Foundation.

Before we get to the video, here’s a transcript snippet from Goolsbee, right around the 2:30 mark of Mitchell’s video.

In the Republican plan however, people making more than $1 million a year, are getting a tax cut of more than $100,000. That’s expensive.

Giving these big red eggs to the very high income people would cost $700 billion that we would have to borrow to give it.

Is he friggin’ kidding me? There are no tax cuts, the tax cuts were put in place in 2001 and 2003, resulting in a huge increase in the amount of tax revenue flowing to the federal government. The problem is the federal government went on a huge spending spree and we spent it all. And more!

What we’re taking about now is a huge tax increase that may well indeed keep our economy in a coma for many more years to come. Mitchell notes…

The administration’s simplistic estimates – which are based on the absurd notion that tax policy has zero impact on economic output – are laughably inaccurate.

That’s just one point Mitchell hits Goolsbee on in this video. Watch the entire piece.

As a reminder, I wrote a piece back in Nov. 2008 – reposted in Feb. 2009 – concerning the effect of the 2001 and 2003 tax cuts. There was a 36 percent increase in federal tax revenue between 2003 and 2007 after the 2001/2003 tax cuts. Corporate tax revenue went up so much the tax burden comparison between corporations and individuals shifted in favor of the individual by more than 10 percent!

The problem? Spending went totally out of control.

Here is the original White House video from Sept. 30. Note to Goolsbee … a big red “goose egg” means your getting nothing. Come up with a better analogy.

CNN: Pay no attention to the embargoed info on the screen.

Do we need more politicians like New Jersey Governor Christie?

“Obama On Your Shoulder … Again”
4 replies

The Independent voter
Scroll to top