There are many reasons to dislike the Cap and Trade bill. Today I write about the most damaging part of this bill which I do not see mentioned anywhere.

Cap and Trade will cap our country’s economic growth. Ideally we want the US economy to grow. You can not have economic growth without increasing energy consumption. Increased energy consumption results in increased carbon emissions. Cap and Trade places a cap on the amount of carbon that can be emitted by all industry in our country by limiting the amount of carbon credits that are made available. 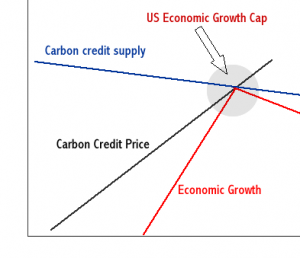 There is a point where it will not make sense to conduct business because the cost of production is too high. If this market operates efficiently, and I think it will, companies will simply determine their breaking point and operate to that point. Weaker companies will go out of business and lack of supply will increase the cost for good and services. Initially it makes sense that market with low profit margins will re-situate themselves first but no industry will be immune. Prices will rise to maintain margins but at some point people will not be able to buy.

So what happens when this tax squelches production? The product or service will be produced elsewhere. So where will they be produced? As soon as the cost of delivery, tariffs, and production drops below the cost of the carbon tax, production WILL go elsewhere. We have actually seen this happen in many products and service already due to increased labor costs in this country and the availability of cheap labor in other countries. Have you called tech support recently? Do we really need to drive production to other countries?

This bill does NOTHING to decrease carbon emissions and the administrator of the EPA freely admits this.

So what DOES this bill do?

In summary it is my opinion that this energy bill (cap and trade) will be the single most damaging piece of legislation that our country could pass. This legislation is a mechanism designed to tax every citizen and visitor to this country. This legislation transfers wealth to the players in the carbon trading markets. This legislation has nothing at all to do about climate change or the health or welfare of any United States citizen.

The only sales the Obama administration are stimulating…

Sad news from the Sound Off Family
3 replies