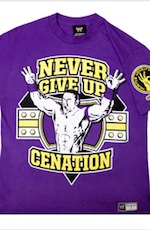 It was really a silly stupid, almost moronic suggestion on the part of the Secretary of State and it took a lawsuit to get it stopped in its tracks. No silly, the AG passed on this “freedom of speech” issue.

A federal Judge ruled this afternoon in a lawsuit filed by Vince McMahon that WWE paraphernalia passed the voting test and may be worn into the polling place.

U.S. District Judge Janet Bond Arterton issued an order on Wednesday that requires that Secretary of the State Susan Bysiewicz  not apply state election laws regarding political advertising to the WWE fans.

The Secretary of State insisted that she never ordered poll opeators to prevent WWE wearing voters from voting … and that is true. But the suggestion was clear.

But this year, the Secretary of the State’s office is telling local election officials that the prohibition also could be extended to gear promoting World Wrestling Entertainment.

That means a voter wearing a Cenation T-shirt or Generation D X Army pendant may be asked to remove it, depending in the discretion of poll workers. WWE is a worldwide entertainment company built by U.S. Senate candidate Linda McMahon and currently run by her husband Vince McMahon.

“Even though it doesn’t say her name directly…the brand is so ubiquitously associated with the McMahons,” said Av Harris, spokesman for Secretary of the State Susan Bysiewicz.

On the other hand, a polling place stopped a young woman from voting, who was wearing an Obama 2008 shirt:

The problem is that Francis was wearing a 2008 Obama election shirt. It has photos of the first family during the campaign accompanied by the phrase “Our President Obama.” The presiding elections judge told her she could not vote, nor could she help her disabled mother vote, until she either turned the shirt inside out or covered it up to hide the message and photos.

“He is not a candidate in the Texas election,” Francis said. “So why are you denying me the right to vote?”

True, but in that case Texas election code prevailed. The ruling was that Obama, as President, he was the head of the Democrat party and the Democrat party was on the ballot. Got that? I’m not sure I do. Let me give it some thought.

Catholic Church under fire once again

Charlie Cook: The odds are greater it’s over 60 than under 40

Shocked, Shocked I am…
Scroll to top