That was the question put to President Obama’s director of national intelligence at a Senate hearing today. Dennis Blair simply refused to answer a simple question. They can’t answer the question, probably because the White House staff will need to “measure the political winds” if the subject ever comes up.

So let’s take a look at Jeb Babbin’s article over at Human Events for reference.

Blair was asked whether, if we now caught Usama bin Laden, should the terrorist boss be read his “Miranda” rights.  And Blair declined to answer. 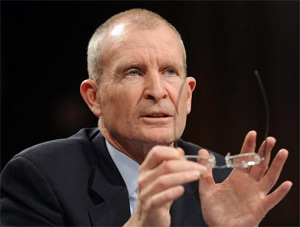 This administration seems to be making quite the mess when it comes to ensuring the preservation, protection and defense of the United States and the Constitution huh? Babbin goes on to list out a few other missteps that have left security-minded citizens wondering if this is executive inexperience or willful conduct.

On practically his first day, Obama announced the United States was clearly at fault for inciting Muslim-extremist violence by creating a detention facility for terrorists on mainland Cuba, and allowing enhanced interrogation techniques on high-value terrorists who provide us information about the people who want to kill us.

Babbin goes on to note Obama had promised to create a high value detainee interrogation group (HIG) at the beginning of his term, and provided additional details about the formation of the group in late August, seven months later. Near the end of January we heard – on background – the HIG had not even been formed yet. That’s one year for those of you looking at the calendar.

A senior administration official, speaking on background, contradicted Blair, saying the HIG is not yet operational — and, in any case, is supposed to be used for terrorism suspects detained overseas. “This is very basic, very clear,” the official said, expressing surprise that Blair would say the HIG should have been involved.

On Christmas Day, when Umar Farouk Abdulmutallab tried to take out Northwest flight 253, you would think those in charge of national security would have a perfect opportunity to take advantage of the HIG, but as noted above, the group  is limited to terrorists who have been captured overseas. Did you know this?

In reference to the Fort Hood terrorist attack…

The director of the new interrogation unit, FBI Special Agent Andrew McCabe — who has not been previously identified in the press as the leader of the High-Value Detainee Interrogation Group (HIG) — referred all questions about the Hasan case to the FBI’s public affairs office and said he would not be able to elaborate on HIG operations beyond an August statement by Attorney General Eric Holder announcing the group’s creation. Still, it is unlikely that the HIG would interview Hasan. Dean Boyd, a spokesman for the Justice Department’s national security division, clarified that the new group is mandated to operate “overseas only.”

This implies no matter what the offense here on U.S. soil, the Obama administration seems intent on using the criminal court  system to deal with the terrorists. So, if we have a Jack Bauer 24-style attack by 20 terrorists hitting four nuclear power plants all at the same time, only FBI special agents (no offense) and not the HIG would be used to interrogate them to find out what they know.

We now know the administration will demand terrorists captured here in the States will be Mirandized and provided council immediately.

Attorney General Eric Holder stepped up today and let us know the decision on how to treat Abdulmutallab after his failed attack was below the pay grade of the commander in chief. I can see him now … making quick phone calls to ensure the terrorist in custody on the way to the hospital was read his Miranda rights. Looks like it took him about 50 minutes to get through.

At this point, it is reported Abdulmutallab is cooperating with the FBI providing solid information. Hat tip to Sweetness & Light. The good news is the FBI was able to get the family – supposedly – to encourage their son to cooperate with the FBI and assured him he would be treated fairly.

Although I’m completely willing to accept Abdulmutallab is one easily willing to fold at the card table even after being Mirandized, my guess is he missed the al-Qaida lecture on shutting up if ever told they have the right to do so; and I don’t want to gamble on foreign terrorists holding back crucial information after attacking soft or hard targets in the United States.

Intellegence community: 10 to 20 e-mails between Hasan and Islamic cleric

Stray cats, dogs and other sneaky thingsMedia note to Special Olympics: It’s not about Rahm … it’s...
Scroll to top