Two H/Ts go out on this one. First Jim Hoft, who drew my attention to the original story yesterday. As hard it is to believe, it is true, a Wisconsin Democrat threatens a Republican legislator with “You’re f***in dead.” The details on the threat are below the fold. More importantly Hot Air points to an interview on Fox this morning with the Republican woman who was threatened with death. “Yes, I felt intimidated.

The back story first, from my original source, Gateway Pundit ...

And just who is Hintz, that he would threaten a woman, much less another legislator? Why he’s the state rep who is currently ensnared in a prostitution sting, arrested for paying for sex. I thought Democrats respect women? How come they are only libertarians when it comes to the fun stuff, as AP so famously noted about Bill Maher one day.

And speaking of AP … he points us to an interview this morning on Fox with the female rep who was threatened … Republican Rep. Michelle Litjens. Did she feel threatened? You betcha! And the little creep let her think about it all weekend before he apologized yesterday, and only after the media exposed this little misogynist.

Watch and listen to her voice. And then remember, this is the party that claims to defend women’s rights? Uh, yeah, right.

Here’s a pic of the “big man” who threatens women and buys sex. My guess is the prostitutes of Wisconsin should consider themselves lucky he got busted. 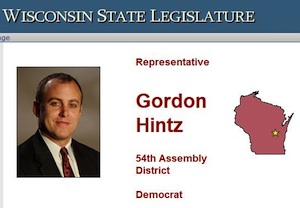 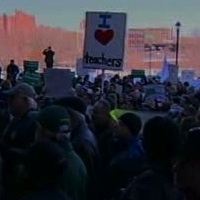 A funny thing happened to union membership in Wisconsin
13 replies

Was someone, or someones, trying to sabotage the economy in 2008?