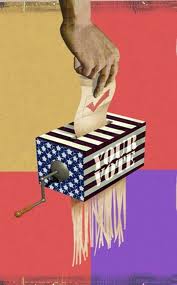 In 2007, The New York Times noted the five-year effort by the Bush administration’s Department of Justice (DOJ) investigation found little evidence of voter fraud. Even if it is rare, it is an egregious violation of the rights of individuals whose votes are invalidated by voter fraud.

A few states around the country have implemented or will implement laws that simply require voters show a government ID when they vote. They want to protect the people who can legally vote from having their votes invalidated by an illegal vote. President Obama’s DOJ think that step is some sort of egregious violation of the rights of hispanics in Texas who may not have the opportunity to pick up a government-issued ID.

The Justice Department blocked Texas’ new voter-identification law Monday, arguing that it targets the state’s Hispanics — and igniting yet another clash between President Obama’s administration and a GOP-run state.

Texas is the second state to have its voter-ID law rejected by the Justice Department, which has cast a critical eye on Republican-controlled legislatures as they move to combat both illegal immigration and voter fraud.

Assistant Attorney General Thomas E. Perez said he was using the federal government’s power under the Voting Rights Act to block the state’s law. He said the data show that Hispanics could be twice as likely as other groups to lack the right kind of identification.

You see, it’s the GOP-run states and the Republican-controlled legislatures that are the problem here, not the people of those states who demand their legal votes – every single one of them – count. But Obama doesn’t think much about the rights of legal residents of GOP states, especially when they’re on the boarder with Mexico.

We’ve discussed this before, but think how frequently you’re asked for a legal ID. Certainly the Obama administration would argue everyone needs to provide a government-issued legal ID to fly on a commercial airline right? How come Obama is not suing the TSA (itself) for requiring IDs to fly? Certainly Hispanics – who could be “twice as likely as other groups to lack the right kind of identification” – are being discriminated against for simply wanting to fly somewhere.

This issue is not a hysterical reaction by the GOP. There are certainly tens of thousands of voters who go to the polls and vote when they are not legally able to do so. Democrats may think that’s not a big deal (gee, I wonder why), but for those of you who have had their vote completely invalidated by an illegal vote, it seems the Voting Rights Act and the Obama administration could not give a damn about you.

Ed Morrissey notes the DOJ has most likely sued Texas under Section 5 of the Civil Rights Act. My emphasis in bold.

We covered the fight over Section 5 at the end of last year.  Texas offers another test case for the continuation of the DoJ’s supervision of southern states nearly five decades after the CRA’s passage.  The Supreme Court nearly dismantled Section 5 in 2009, deciding to let the question rest for a more direct case than Northwest Austin Municipal Utility District v. Holder.  The decision in that case spoke about the court’s skepticism of the law, though, and in an 8-1 decision in which most of the liberal members of the court participated.  The importance of Section 5 is that without it, the DoJ would have to find explicit discrimination in voter laws in the southern states, rather than objecting on the basis that Perez “cannot conclude that the state has sustained its burden” of proving non-discrimination, akin to making the state — and the voters who approve such measures — prove its innocence.

Ridiculous idea of the week: Charge your mobile device with a breathing mas...

It’s an evil special interest group … unless it’s your...
Scroll to top