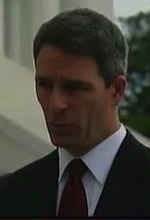 The Attorney General of the Commonwealth of Virginia, as I have found most Virginia politicians are, is a very sober, thoughtful, and conservative thinker. So when Ken Cuccinelli says Obamacare not only infringes on both personal and states rights but endangers the very freedom of Americans on so many other issues, you better take note.

Yesterday, as the SOS noted (please read for background), the Federal Court District allowed Virginia’s lawsuit to stop Obamacare to go forward on four main grounds. Among them are the law may indeed overreach and may indeed harm Virginia. But the one that was most interesting is the Court’s decision regarding regarding Obamacare and the commerce clause and the Fed’s ability to regulate “repose”. Repose? Last night on Fox Gretta interviewed the Virginia AG. Listen closely. Then follow all the way to the end for the AG’s money line. Gulp!

I think Virginia wins this case and so do the other states that have joined Florida. Based on what Cuccinelli told Gretta … they had better. Comments, questions?

Virginia lawsuit against Obamacare will continue