This is the kind of research the main stream media does not seem able to do. Let’s say I told you we needed to spend $1 million dollars to keep unemployment from rising 2 percent next month. You agreed, we spent the $1 million, but unemployment still went up 2 percent. What would your reaction be?

Innocent Bystanders has two (first, second) good posts on the subject of President Obama’s Recovery Plan and what it was supposed to deliver. All along, the administration made it quite clear that if they did not employ these emergency measures, things will be much worse. From IB’s second post.

In a stunning surprise, the data does follow the curve projected by the GOP and the conservative punditry, who said there would be no near-term benefit from the stimulus package. Now the economists are saying that the unemployment rate won’t start dropping until the middle of 2010. Gee, that’s when it would have started dropping if we had done nothing.

To be completely fair, President Bush and his administration made similar claims last summer and into the fall. That ticked me off too.

A key goal enunciated by the President-Elect concerning the American Recovery and Reinvestment Plan is that it should save or create at least 3 million jobs by the end of 2010. For this reason, we have undertaken a preliminary analysis of the jobs effects of some of the prototypical recovery packages being discussed. Our analysis will surely evolve as we and other economists work further on this topic. The results will also change as the actual package parameters are determined in cooperation with the Congress. Nevertheless, this report suggests a methodology for ensuring that the package contains enough stimulus that we can have confidence that it will create sufficient jobs to meet the President-Elect’s goals.

This report also presents some discussion of the trade-offs involved in choosing different elements of the package. For example, how do tax cuts, fiscal relief to the states, and increases in infrastructure spending compare in terms of jobs created? Similarly, how do the different types of spending differ in terms of the timing of the jobs they will create? The report also discusses the types of jobs that will be created and the possible demographic composition of the workers who will find jobs as a result of the stimulus. 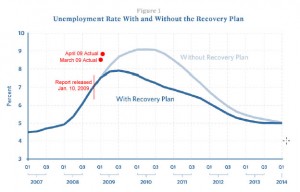 Included is a telling chart. If we don’t do this, unemployment will be much worse! This was a key selling point for Obama’s recovery plan. The problem is we are already at his own suggested worst case scenario – when it comes to unemployment – even though the multi-billion dollar plan is already law. Click on the image to enlarge.

The issue here is the report was released on Jan. 10 and within the first month, the predictions are off – way off. Since election day, the economy was Obama’s number one priority and he had teams of economic advisers putting this plan together.

That certainly ensures I’m comfortable with the economists Obama has working for him.

In the endnotes of the document it is noted…

Forecasts of the unemployment rate without the recovery plan vary substantially. Some private forecasters anticipateunemployment rates as high as 11% in the absence of action.

Yes, yes… I know… we need to give the plan time to work. For those who wish to provide more time I ask you one question. At what point will you step up and say it is not working? By using Obama’s own figures, can we agree that we are at his “worst case scenario” if we did not spend the billions and billions and billions of dollars?

My concern here is that Obama’s estimates were so far off they are going to convince you the stimulus program was not enough and the government needs to spend more money.

I still can not see why the American people think it is the right move to have them steal money from future generations – that has yet to even be earned – and spend it in this way. Why do you think the government is the right solution?

Liberals have stated – on the record – they do not think you are smart enough to spend your money “the correct way” so they want to take it from you and spend it for the greater good. I’ll argue that they know you will spend your money in a way that is best for you, your family and your community.

They certainly can not have that… it would show that you can make it on your own, without big brother helping you every step of the way.

Update (Jim): Thought it might be appropriate to add this clip from Newt Gingrich on Fox News Sunday yesterday. Could it be the Republicans were right? That if you want to stimulate the economy,  you do what Newt suggests?

The numbers would seem to indicate the worst is yet to come. I hope I am wrong but I will blog on this later.

Guantanamo detainees in the US and enhanced interrogation techniques