Some sort of dispute between the driver and management? A Muslim bus driver elected to stop in the middle of his route for prayers in the aisle of the bus. His positioning during prayers kept passengers from exiting the bus, but nobody said a word.

Passengers were “stunned” – and some bewildered – but what concerns me is nobody said anything until after the event was over and the passengers were off the bus. The story from the UK’s Mail Online, with a hat tip to Pamela Gellar at Atlas Shrugs.

A Muslim bus driver stunned passengers when he pulled over and started praying in the aisle – with the engine still running.

The driver parked without warning then rolled out a fluorescent jacket as an improvised prayer mat.

He took off his shoes, knelt down facing Mecca, and began to chant.

The prayer session held up the bus for more than five minutes with no-one able to get on or off.

Put yourself on that bus. If my driver stopped the bus and immediately started walking towards the passenger compartment, my situational awareness would peak immediately and I’d want to know what the heck was going on.  At that point, it would have nothing to do with if the driver was a Muslim.

Then the driver begins to pray.

At that point, I’m off the bus and suggesting everyone else leave immediately. What say you? Would political correctness or the thought of being branded a racist result in you staying put with your mouth shut? Not one passenger did anything – from what we can gather – except sit there with looks of … bewilderment.

Mother-of-one Miss Griffiths, 33, of Camden, north-west London, had boarded the bus a few minutes earlier on her way home from work.

She says that she even feared at the time that the driver might be a fanatic planning to blow up the bus.

She said: ‘I have done the journey a million times before but I was in a hurry to get home to pick my little girl up from school.

‘We had just picked up and let off people at a bus stop and moved off again when the driver stopped the bus very suddenly.

‘He got out of his cab, leaving the engine running, and walked towards the middle exit door.

‘He laid out a fluorescent jacket on the floor and I thought that somebody must have been sick and he was covering it up.

‘I didn’t really think much of it.

‘But then he took off his shoes and began praying. I was gobsmacked and quite bewildered.’

Miss Griffiths said the bus driver didn’t give the passengers any explanation as to what he was doing.

‘He hadn’t addressed the passengers at all,’ she said. ‘I didn’t say anything and nor did anyone else. I thought it would all be over in 30 seconds but it went on for over five minutes. 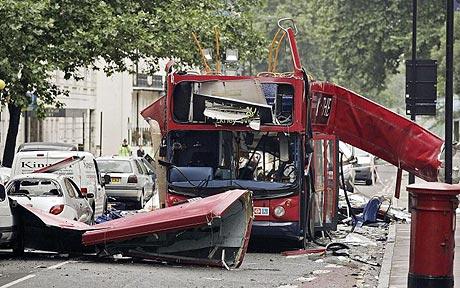 The Number 30 bus in Tavistock Square, destroyed by a terrorist bomb on July 7, 2005 in London. 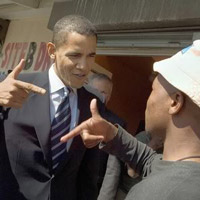 Discuss: Should crime reports include race of subject(s) if known?