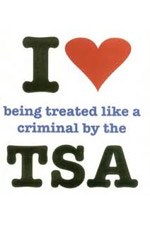 We’ve found the tipping point. I’m calling this week’s TSA news Groper-gate even as the agencies leadership continue to deny screeners are molesting anyone. It’s kind of like a pedophile claiming he or she is innocent after getting caught on video. Travelers themselves will define their own experiences thank you very much.

This is a huge problem for Janet Napolitano, the director of Homeland Security, and the entire system the Bush and Obama administrations have put in place at airports across the country. Arriving to the airport early and waiting in lines? Not to difficult to deal with. Leaving your 24 ounce super-value bottle of Breck shampoo at home? Fine. Taking off your shoes? Well … OK.

Randomly getting pulled into a special screening area where your bag’s contents are throughly inspected and you go through a “light” pat-down with the screener using the back of his or her hands? Now … we’re getting annoyed. 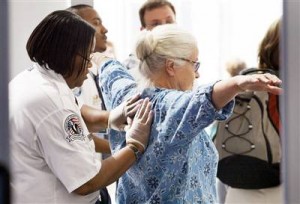 But opt out of the new backscatter or millimeter wave imaging systems due to health or privacy concerns, TSA screeners immediately begin the humiliation process by chanting opt out, opt out and put you on display for all to see. The “light” pat-down with the back of the hand has turned into a full-fledged groping with the palm and fingers of both hands. Seemingly, no part of the body is excluded from inspection.

Imagine watching a perp getting caught on the Fox series Cops and the officer searching the criminal for weapons or contraband. Just replace the cop with a smiling 22 year-old in a blue TSA uniform at the airport as he or she gropes your 12 year-old daughter on her way to Disneyland.

The over-bearing United States Department of Homeland Security (DHS) has deemed these procedures to be necessary and reasonable to make us safe while flying the unfriendly skies. The problem is, DHS can not make us safe, it’s totally and completely impossible to “make us safe” and the sooner everyone understand that fact the better.

Some steps can certainly make things safer while traveling, but safe is not possible. Wrap your mind around that for a few seconds. There are between 150 and 180 seats on a Boeing 737 commercial airliner, the most frequently used aircraft for passenger traffic in the United States.

The TSA – specifically as a result of the high-impact 9/11 attacks – have almost exclusively targeted airport passengers for enhanced security screening because the attacks originated at airports, and on commercial airliners. Up until the past couple of weeks, Americans have – in general – been willing to accept the loss of some liberty and freedom to make us a little safer when flying.

There are not many self-contained modes of transportation – other than a cruise ship – that can carry that many passengers, but there are many other buildings, schools, bridges, tunnels and stadiums that can contain thousands of people. One school bus transports between 45 and 65 kids.

If, God-forbid, another large-scale terrorist attack happens at or near ground-level, how willing are you to accept backscatter, millimeter wave imaging systems and groping at schools, baseball stadiums, or even at work? If you’re OK with the imaging systems and enhanced feel-me-up techniques at the airport, Homeland Security will assume you’ll happily give up more of your liberty and freedom to be “safe” at other public locations.

The Fort Hood terrorist attack killed 13 and wounded 30. We’re waiting to hear from Homeland Security concerning how many deaths would be required before they bring in the machines.

Every day, we are also willing to relinquish a small percentage of our liberty and freedom for one reason or another, but the TSA intrusion – with imaging and outright groping – has tripped the liberty and freedom circuit breaker of many Americans. [At this point, you’re welcome to sing a stanza of Quiot Riot’s We’re Not Gonna Take It on your own.]

No more. Something must be done to stop this intrusion.

It’s come to this: Plea bargaining with terrorists – Update: SOS weighs in.

Mumbai attacks revisited – including audio calls between terrorists and handlers

Just When You Thought You’d Seen It All…