Twenty-four hours have passed since the so-called torture memos have been released and as I expected, it’s not a story that has gone viral. Plenty of coverage, but not oh-my-God kind of coverage.

We begin with video from Special Report on Fox News with comments from Bill Kristol. Bret Bair has a good one – the only thing we found new was the caterpillar in the box… nice.

Next we have Blackfive – my favorite military blog – with some good media snippets plus this comment.

Faux Outrage. That IS the basic emote out of the WH these days. Why is it fake outrage? Because if it were real outrage, the WH would have changed something, ANYTHING, about how we conduct the war, intel operations, interrogations, a.n.y.t.h.i.n.g. And the left is going berserk over the President’s pledge to not seek charges against the CIA agents involved. 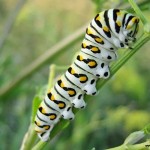 Caterpillars of black swallowtail butterflies can destroy crops in home gardens quickly. Watch out! If you click on this image, be forewarned.

Dale Carpenter over at Volokh Conspiracy has some interesting thoughts.

To answer that question, the 2002 Bybee memo released Thursday relies heavily on the lessons learned from a U.S. interrogation training program for military personnel called Survival, Evasion, Resistance, Escape (SERE). In SERE training, U.S. military personnel have been subjected to the very techniques proposed for suspected Al Qaeda agents — including the most extreme of the techniques, like extended sleep deprivation and waterboarding. The discussion is at pp. 4-6 in the Bybee memo. Basically, the memo says that the CIA has concluded based on consulting with SERE experts that these methods have caused no “severe physical or mental” harm to U.S. military personnel subjected to them.

Carpenter went on to mention the experience may well be different between SERE trainees and real detainees.

LGF noted the NY Times completely hyperventilated over the issue – not unexpected – and described them as frat house antics. Where have I heard that before? The Times piece used the word harsh in the headline.

So – what has this accomplished – if anything?

I am sure glad you can’t be my wife!

No intellect? No problem, scream and cry like toddler
3 replies