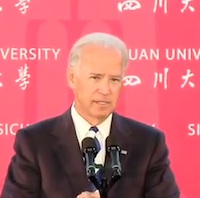 We talked about this on the show today and as promised the link to the Kathryn Jean Lopez story follows. But it all begins with Joe Biden’s trip to China and his speech Sunday at Sichuan University in China Sunday.  The White House is now trying to walk back  Joe Biden’s incredibly stupendously stupid comment referring to China’s one child per family law which has resulted in millions of babies being aborted, forcibly,  and in many other cases infanticide. , “You have no safety net. Your policy has been one which I fully understand — I’m not second-guessing — of one child per family.” Oh, there’s more. But luckily, Thad McCotter rides to our nation’s rescue.

Make no mistake the Vice President was verbally bowing to his monetary masters. But reverberations of his comments reach far beyond dollars and cents. And after you’ve read this you’ll have to explain to me why everyone thought Joe Biden was so smart and Sarah Palin was just so stupid.

Before we get to Kathryn Jean Lopez’s column let’s review one more time shall we, the context of Biden’s speech. From the Weekly Standard:

What we ended up doing is setting up a system whereby we did cut by $1.2 trillion upfront, the deficit over the next 10 years.  And we set up a group of senators that have to come up with another $1.2 to $1.7 trillion in savings or automatically there will be cuts that go into effect in January to get those savings.  So the savings will be accomplished.  But as I was talking to some of your leaders, you share a similar concern here in China.  You have no safety net. Your policy has been one which I fully understand — I’m not second-guessing — of one child per family.  The result being that you’re in a position where one wage earner will be taking care of four retired people.  Not sustainable.

The White House has since tried to walk this one back telling us not to pay attention to what we heard, it’s just what we think we heard, but not what Biden really meant. Got it?  Via Hot Air.

“The Obama Administration strongly opposes all aspects of China’s coercive birth limitation policies, including forced abortion and sterilization. The Vice President believes such practices are repugnant. He also pointed out, in China, that the policy is, as a practical matter, unsustainable. He was arguing against the One Child Policy to a Chinese audience.”

Nonsense. The White House knows exactly how serious the vice president’s comments are. Here is just a portion of Kathryn Jean Lopez is column yesterday on the murder that takes place in China on a regular basis in the name of the good of the people.

China, of course, is home to the one-child policy, which turns 31 this September. The policy has manifested itself in a kind of brutality that we can’t watch on CNN but that is nonetheless both real and devastating. China will boast that it has prevented 400 million births since 1980; the program has been implemented through a culture of forced abortion, involuntary sterilization, infanticide, and other persecution. The World Health Organization tells us that China also has the highest female suicide rate in the world. “Could this high suicide rate be related to forced abortion?” asks Reggie Littlejohn, president of Women’s Rights without Frontiers. Many families make sure that their one child is a boy. China has reported as many as 37 million more men than women, making unhappy bachelorhood increasingly commonplace.“China’s One Child Policy causes more violence towards women and girls than any other official policy on earth,” Littlejohn contends. “It is China’s war against women and girls.” And not only against Chinese women; desperate times open the floodgates for sex trafficking. A North Korean women’s “refuge” is sex slavery in China. Women from other neighboring countries, such as Vietnam, often suffer the same fate.

Thus far only one politician has spoken out forcefully about the China policy and ironically he did the day before Biden’s speech, Congressman and presidential candidate Thaddeus McCotter.

“We have to accept the reality that Communist China is a strategic threat and a rival model of governance to the United States.” The applause made clear that the audience had been called to attention.

And the reason, as the party of Reagan and Lincoln, we understand, as a free people — we understand our liberty, which comes from our creator, is the foundation of our security and the foundation of our prosperity. The Communist Chinese regime in Beijing that butchered my generation in the streets of Tiananmen Square for quoting Jefferson and Madison believes that human liberty is a threat to state-provided security and prosperity. They are as wrong today as the Soviet Union was wrong in the 20th century, and I for one will not cede the 21st century to a Communist nuclear-armed dictatorship that tells you how many children you can have, that tells you if you can pass out Bibles, that tells you what Catholic Church you can attend, or tries to culturally commit genocide against the people of Tibet.

It’s a fabulous article please go read it all. And the next time someone asks you who you think would be a great conservative candidate for president why not bring up Thaddeus McCotter’s name. The key remarks come at 9:35.

The Tea Party: the assault continues
Scroll to top