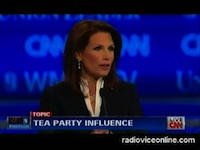 I just thought I would take a moment to put up a few of my favorite moments from last night’s Republican debate in New Hampshire. There’s no transcript, just clips, but they are sure sweet and to the point, and I think kind of entertaining.

I’ll start with a serious one first and will go to a few entertaining ones in a bit. First up Michele Bachmann is asked to respond to a question on the tea party. Apparently a man in the audience feels like he’s been left out. He asks what can be done to make him feel more included in the tea party. Congressman Bachmann gives perhaps the best answer and the best definition that I have heard yet. Dispelling myths.” Obama is a one term president.”

Next up, what I call the bite of the night, Ron Paul was asked if Obama has done anything good for the economy?

Then there’s this one from the Romney, which he drops in at the end of one of those this or that question.

But finally here are Tim Pawlenty and Mitt Romney answering a question on Biden vs Palin. what I find most offensive about this question is that it clearly comes from a liberal host who thought he was putting a Republican in a bind by having to either endorse Joe Biden or hang their hat on Sarah Palin. Much to CNN’s dismay, it wasn’t even close. And this my friends is going to drive the media crazy.

CNN tried real hard to show discord in the Republican Party. But not one single Republican candidate would take the bait. It’s unity all the way, and the focus of that unity is President Obama.

Romney Not Perfect – Still Voting for Him

Romney & McCain Accuse Each Other of Being “Liberals”

Romney’s presentation on health care from May, 2011

Did Gingrich pack the debate audience with supporters in South Carolina?
3 replies

Not just another bump in the road