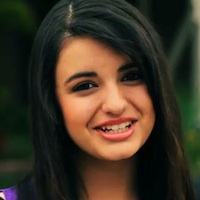 No one seems to like the song, except the singer/songwriter and to be honest I am not one of the 30 million views, although I have been fascinated by the viral nature of the story. But When Forbes jumped on the band wagon, well I had to post. Read it and weep my little toiling mobsters.

The girl is Rebecca Black, a 13 year old who composed and wrote a song about … umm … Friday? There’s nothing steller about the singing and the lyrics are exactly what you would expect from a 13 year old with all the emotional experience of a … umm … 13 year old.

But it’s ordinariness apparently has made it a hit … to the tune of $1 million big ones?

It would seem that the investment paid off, many times over. Although the YouTube/Google party line on video ad revenue is vague (“There are no guarantees under the YouTube Partner agreement about how much you will be paid.”) some digging turns up speculation on potential profits.TechCrunch’s Erick Schonfeld reported today on Google and YouTube’s revenue figures. Looking at 2010’s actual numbers, the site makes about $1 per thousand page views. For videos running ads as part of the revenue sharing program, that revenue is then split between YouTube and the content creator. Content creators, or partners, take 68% of the profit. At 30,000,000 views, that lands Black and Ark Music Factory $20,000 – a 1000% return on investment. That number matches the figure reported by Damian Kulash Jr., the lead singer of indie pop band OK Go, who have made a name for themselves via viral videos.

The revenue doesn’t stop there, though. Where Google has had a notoriously tough time monetizing YouTube content, Apple’s iTunes has had significantly fewer problems. Since hitting the online music store last Monday, “Friday” has amassed a staggering number of downloads,reportedly topping 2 million; the song currently sits at #45 on the iTunes Top Singles chart. According to 101 Distribution, an independent music distributor, iTunes pays out $.70 per single download in the United States.

I am not sure why people would be willing to pay, much less watch … but you watch and tell me what you think. Am I missing a piece of the new instant culture? Come on my younger mobstas … what’s going on here? Come on … hit that comment section.

UPDATE: I just remembered this post from HotAir from last week … if you think the MSM will let this teenager get away without a whack, you’re crazy. Shameless. “Canning … is a 38-year-old woman who bullied an eighth grader on national TV.”