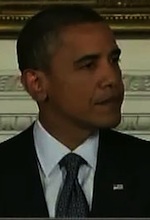 To paraphrase one my favorite Rush Limbaugh expressions in regard to the media, Obama looks more and more like a “Drive-By” President, certainly on the issue of the mosque but it also applies to the Health Care debate (“There may have been a few stray cats and dogs in that bill”) and of course the “stupid cops” controversy in Cambridge, MA.

In each case the President drops a controversial statement, walks away and watches as chaos ensues. Eventually he modifies or back tracks, or has a beer or something … and then plays the role of conciliator. Nice job Mr. President.

This time he tells us the Ground Zero Mosque should be built, then backtracks, then all hell breaks loose, then he goes on vacation while the opposition is labeled raaaaaaaaaaaaacist (H/T Michelle Malkin), or Islamophobes, or hatemongers or whatevah.

Mark Halperin of Time Magazine gets it. He tells Joe Scarborough this morning he’s shocked, shocked the President would “drive-by” and thinks the President is the only one who can resolve this issue, well and Mike Bloomberg.

Well actually no. The folks in my poll today are not surprised and they think the President has done enough damage. I disagreed at first but now I agree. This was planned, the ensuing chaos is just what he expected. Now he can be the hero. Ughhhhh. Create chaos, revel for a week, then step in as the great conciliator? Any physiologists out there know what this is called? I’m not saying, I’m just saying is all.

The case against the Obama presidency (Part 2)

Obama is the best thing to ever happen to … libertarianism?

Daisy Kahn: The mosque will be built and by the way … you’re all...
Scroll to top