OK … you were right and I didn’t think it was possible. Today’s poll question … do you think the Senate Democrats will kill, cut, or add more pork to the porkapalooza, should not have been a hard one since I wrote the poll question but I admit I was wrong. I thought the answer clearly would be that they would cut or at the very least hold fast … but no. By an overwhelming majority you voted … for option 3 … that the Democrat Senators would add more pork.

Watch the video and try not to blow your stack. Let me just apologize in advance.

Update: RVO reader Nick I think nails this pretty well … although Nick … I am sticking with Porkapalooza.

Jim,
Two things. To add to the regal view of our Congress I would like to refer to the boondoggle that is tthe “stimulus’ as: PORKUS MAXIMUS. Also, here’s a great quote from Mark Twain apropos of our situation : “It probably could be shown by facts and figures that there is no distinctly native American criminal class except Congress.” 1871

Take action now. Radio Vice Online and Jim’s show – Sound Off Connecticut – now has a national audience. We’re even getting hundreds of visitors from outside of the United States. As a coalition, we may be able to do get together and burn up some phone lines and keep e-mail servers busy.

Why does the government insist that to stimulate the economy, cash must be taken from the people, given to the government, and redistributed through government sponsored projects? We’re the ones that have to give up, to supposedly “get.”

We need to let our representatives know that the best way to do this is immediately put cash back into the hands of corporations, small businesses and the people. With less tax burdon and less regulation, we’ll do just fine thank you.

Do not tell me we’ve already tried that experiment. We have not. We do not have a private health care system. Public education systems are failing us. Government corruption continues to thrive simply because elected officials have too much power to decide where all of the pork dollars go to.

The United States Senate is now our audience. Will they hear you? Here is a list of U.S. Senators in PDF format. It is current and up-to-date. You can also go to this page to contact your Senator by e-mail.

If the numbers I see here are correct … then Republicans refused to cave to this pork filled piece of crap. Some economic stimulus. Money for sod, birth control, HIV and STD prevention, government cars, the arts … not to mention billions for day care centers and let’s not forget ACORN. Please. Stimulus? You decide. At least Republicans are behaving like Republicans. Click the pick to see full size. I will update as news becomes available. 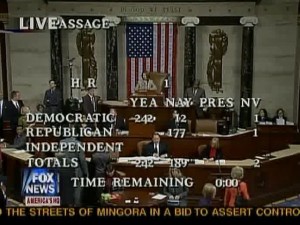 UPDATE: Jessie Hamilton of  The Courant has an absolutely great post with comments from Connecticut’s congressional delegation.  My favorite is:

From Rep. Joe Courtney, D-2nd District: “My vote on this jobs creation package will put more cops on our streets, improve our local school buildings and makes college more affordable, helps to spur innovative energy efficiency programs, and move us towards energy independence, while giving tax breaks to families and small businesses. While the Wall Street bailout last year forgot about Main Street, this legislation is an investment a better America for all.”

Ok Joe sure … Billions of dollars for Universities keeps professors employed but not affordable, new school buildings nice for the teachers but creates jobs? As for those energy programs they are years if not decades away from providing any meaningful work.

OK … yesterday Gibbs defended the millions of dollars to sod the DC mall as an economic stimulus.

But that became an embarrassment so the Democrats took it out. Today Gibbs was hit with the question today … yesterday a stimulus, today its not?

These guys are starting to look like the gang that can’t shoot straight. But here’s the kicker. Major Garrett just reported on Fox that Obama intends to leave any pork in the bill that does not create a public outrage.

People … you have your marching orders.

The President met with House and Senate Republicans today and the way he figures it … they will be a part of the final “Democrats Only $825 Billion – $1.3 Trillion” stimulus plan … here he is right after the meeting with House Republicans.

But wait just a dog gone minute. Congressman Mike Pence … a key contributor to that meeting, told Neil Cavuto there is not way they will lend their support to a plan where they have had no input, been shut out by Democrats, on a package that is full of pork. He pegs the plan at not $825 Billion BUT $1.3 Trillion (compounding, don’t ya know)

If President Obama wants Republicans to put their names on this so they can share the blame if it doesn’t work (his political insurance policy) he better get his (Democratic) House in order too.

We dished out hundreds of billions to the finance system and got pretty much nothing in return. Many of these institutions are now insolvent – whatever that means – but that does not mean the government can not find other ways to spend upwards of $1 trillion dollars to stimulate the economy.

I should have took the train down to Washington D.C. myself last week and put my request in, I’m certain I could have gotten a billion or two.

Searching high and low, there stories everywhere about projects that could be included in the Obama stimulus plan, you know, stuff like ACORN getting billions, hundreds of millions for contraceptives and that organized crime museum.

Now is your chance to get involved! Spending upwards of $1 trillion dollars is not an easy thing to do, nor is trying to wade through all of the news stories that mention these different projects.

When you find a story, add it to the comments section below, or send us a quick e-mail via the Contact page and we’ll add it to the list!

When you’re talking $1 trillion in spending, it’s way to much work for two guys who manage a blog… help us out will ya?

Update (Jim Vicevich): Well it didn’t take long before Jim Geraghty from National Review found more to throw in the pot … here’ s a sample of what he found. Click here to read more.

An additional $300 million for roads on Indian reservations.

An additional $100 million for the Lead Hazard Reduction Program.

An additional $245 million to “maintain and modernize the information technology system at the Farm Service Agency.”

Update 2 (Steve): Don’t forget that you can read the entire proposed stimulus plan – subject to change on a minute-by-minute basis. 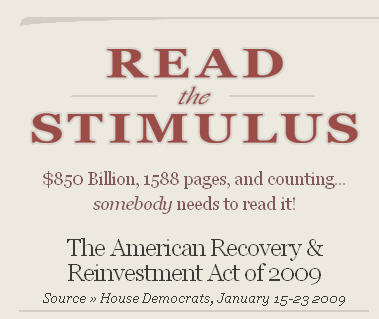 Red State does a great job of drawing out the pork in a 825 billion dollar “must have right away or the nation will sink into a depression like you have never seen before” stimulus package.

Are you curious about what’s in the stimulus bill? We’ve put it online at ReadTheStimulus.org, and have even parsed the 334-page document on this spreadsheet, line by line and page by page, to reveal the hundreds of billions in new spending that this monstrosity authorizes.

One woman’s pork is another’s investment … in this case I guess Pelosi has her own definition of pork.

I wish I could tell you how these loathsome human beings get away with this kind of speak time after time … I just don’t know … but they do. This is the same woman who had the cashews to try to redefine Catholic theology in her own image. She is a particularly despicable person on that count alone.

I’m really not so sure. Many are of the thought the horse has left the barn, Elvis the building, and the pig is rolling in the slop.

During yesterday’s media show, Obama promised to ban, that’s right ban, all earmarks. My question right off the bat is what is his definition of an earmark?

And it has to begin with the economic recovery and reinvestment plan that Congress will soon be considering, that we’re going to be investing an extraordinary amount of money to jump-start our economy, save or create 3 million new jobs, mostly in the private sector, and lay a solid foundation for future growth.

But we’re not going to be able to expect the American people to support this critical effort unless we take extraordinary steps to ensure that the investments are made wisely and managed well. And that’s why my recovery and reinvestment plan will have – will set a new higher standard of accountability, transparency, and oversight.

We are going to ban all earmarks, the process by which individual members insert pet projects without review. We will create an economic recovery oversight board made up of key administration officials and independent advisers to identify problems early and make sure we’re doing all that we can to solve it. We will put information about where money is being spent online so that the American people know exactly where their precious tax dollars are going and whether we are hitting our marks.

When Obama states that we are going to ban all earmarks, it certainly sounds pretty good but the problem is that the Executive Branch does not have that power. Congress determines spending budgets, and all that Obama can do is veto legislation that has – again, what he defines as – earmarks.

Morrissey at Hot Air has more.

… Obama is only limiting his earmark ban to the recovery package, not overall — and even then, not entirely. Only those projects inserted without review count as earmarks. What constitutes “review”? A floor vote, or a discussion in committee among the porkers around the table? And even then, the only way Obama can get earmarks out would be to veto anything Congress presents to him with earmarks within it — and I doubt Obama would kill the centerpiece of his domestic economic agenda merely to make a point about a process he himself used repeatedly as a Senator. In fact, Obama never even mentioned a veto during the press conference.

I also find it highly revealing of the media attending this presser that not one reporter challenged Obama on his authority to deliver on that promise. It’s practically Con Law 101, or even high-school civics, and yet no one thought to wonder how Obama would “ban earmarks” as President. Pathetic.

Lindgren at Volokh Conspiracy agrees that any reduction in earmarks is a good thing, but Obama did not go as far as McCain did promising to eliminate them all together.

He notes Obama was specifically speaking about the current hot topic of the day – the next stimulus package – and not the everyday management of Washington.

… he [Obama] did pledge today to eliminate earmarks in the bill that might be the biggest pork-spending opportunity that Congress has ever considered — which is a major step. Just how much waste this move prevents will depend a lot on how the Obama administration chooses particular projects.

I’m willing to bet that plenty of Democrats on the hill – including John Murtha – are going to be getting what many conservatives call pork… earmarks… or whatever else that you want to call it.

The federal government is just involved in too much unconstitutional spending at the local level. Like I said, I’m afraid that horse has left the barn. What can we do?

I don’t have a law degree. I don’t have 12 hours to read the full text of the bailout bill that the Senate is debating right now. The average person should be able to read this crap – or at least use the Ctrl+f key to do a keyword search in the damn thing.