You are here: Home1 / countrywide

OK … lukewarm … but both the Hartford Courant ..

Mr. Dodd should have released the documents months ago. Countrywide was a major player in the subprime mortgage debacle. Five years ago, it issued the loans to Mr. Dodd, then a member of the Senate banking committee, as part of the company’s VIP program, trimming the upfront costs for refinancing two of the senator’s homes and allowing the rates to “float down” as interest rates dropped.

… His continued waffling about whether or when he’ll release the documents only fans speculation. That’s a disservice to Mr. Dodd’s constituents, who deserve straight talk and accountability from the state’s senior senator.

and The Day in New London …

To clear things up, Sen. Dodd’s office promised eight months ago to release all the mortgage documents, but the senator keeps coming up with excuses not to. He now says he will await the completion of a Senate Ethics Committee investigation. He hasn’t explained why, and we haven’t figured out a good reason.

The Wall Street Journal said it well: “Rare is the politician who could clear his name overnight and chooses not to.”

We again ask Sen. Dodd to release the information. He must know that the continued stalling looks very bad.

OK, neither one exactly puts the old boy on the hot seat. So … as a refresher  … here’s the NBC report. 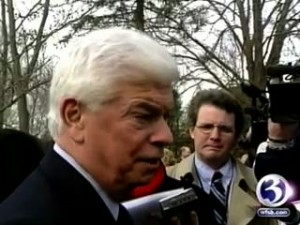 Great review of the Chris Dodd, Countrywide mortgage fiasco on Face The State on Channel 3 today. Nothing new but it is a very good roundup including Dodd’s promise to release his mortgage papers (6 months ago) and his subsequent denial.

Did he think we would forget? Senator Chris Dodd (D-Conn.) got a break on his two mortgages and people were pretty wound up about it. Since he’s the chairman of the Senate Banking Committee people have a right to be wound up.

First he said that the details about his deal with Countrywide would be released at some point. Then he said that he wanted to wait until after the Senate hearings, and then he would release them after the president signed the – at the time – $300 billion bank bailout bill. (a.k.a Crap Sandwich 1.0)

All I hear are crickets; and maybe a jackhammer or two as liberals tear down private enterprise in this country.

END_OF_DOCUMENT_TOKEN_TO_BE_REPLACED

In yesterday’s Hartford Courant, Kevin Rennie reminds us that we still have not gotten any solid information concerning the mortgage deal that Chris Dodd – Democrat senator from Connecticut – got on his two refinances back in 2003.

Rennie brings up questions from my original post on the subject June 17. END_OF_DOCUMENT_TOKEN_TO_BE_REPLACED

Since I’m one of his constituents here in Connecticut, I figured that I would take a closer look at the two mortgages that Chris Dodd and his wife received on his property here in-state and in Washington D.C. As I write this post, I’m assuming Dodd did not ask for special treatment.

[Update June 18] He may have not known he received special treatment, but now he says he knew he was on a VIP list at Countrywide.

But there is one thing that really stood out for me when the particulars of his mortgages were released; the 30 year interest rate – fixed only for the first five years – the Dodd’s received.