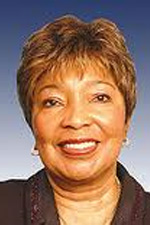 I’ve been thinking about writing a book. Have discussed the project with Jim multiple times during the last 18 months. I’d call it Symptoms of the Disease of course, and it would highlight stories like Rep. Eddie Bernice Johnson (D-Texas) dishing out scholarships from a charitable foundation to family members.

The book would be some sort of combination between Mark Levin’s Liberty and Tyranny, and Michelle Malkin’s Culture of Corruption. You see, Mark does a great job defining the real problem – the disease – and Michelle does an awesome job detailing the symptoms that have developed.

Put them together and you’ve got a best seller I figure, or at least something I would want to read. Maybe someday …

Anyway, back to Rep. Johnson who figures it’s perfectly fine to hand out thousands of dollars in scholarship dollars to family members. I wonder if they even needed to apply for the funds? From the Dallas Morning News with a hat tip to Ed Morrissey at Hot Air. (I’m happy to see local journalists like Todd Gillman and Christy Hoppe pointing this stuff out.)

The recipients were ineligible under anti-nepotism rules of the Congressional Black Caucus Foundation, which provided the money. And all of the awards violated a foundation requirement that scholarship winners live or study in a caucus member’s district.

Johnson, a Democrat, denied any favoritism when asked about the scholarships last week. Two days later, she acknowledged in a statement released by her office that she had violated the rules but said she had done so “unknowingly” and would work with the foundation to “rectify the financial situation.”

The system has grown so huge that corruption is not just the exclusive domain of taxpayer funds, this is a fund set up with private and corporate donations delivered to the Congressional Black Caucus. Then, the members of the caucus have a great amount of discretion concerning who they give the scholarships to.

No chance for political pay-offs there! Maybe it went down something like this…

Lobbyist: Rep. Johnson! We’d like you to support us or maybe even sponsor this legislation.

Johnson: Oh really? Well, why don’t you just make a contribution to the Congressional Black Caucus Foundation and I’ll take a look.

Johnson: Hey Aunt Judy, I think I may be able to help pay next semester’s tuition bill…

Of course, Johnson now admits she “unknowingly” broke the rules, and will work with the caucus to solve the issue.

Initially, she said, “I recognized the names when I saw them. And I knew that they had a need just like any other kid that would apply for one.” Had there been more “very worthy applicants in my district,” she added, “then I probably wouldn’t have given it” to the relatives.

What’s even more interesting is that Congressional Black Caucus members not only have great discretion when it comes to handing out the money, they can also choose how – and if – they elect to promote the program. Johnson’s website does not mention the program at all – so she’s got slush funds available for friends and family.

It’s for this precise scenario that most charitable organizations use independent boards to select recipients for outlays.  Instead of putting the individual Representative in the role of paymaster, a smarter and less fraught method would be for the CBC to handle these applications in an aggregate manner and then have an independent panel make the final decisions, even while Representatives nominate constituents for the awards.  Why don’t they do that?  Because the entire purpose of the scholarships is to make the individual Representatives get the credit for giving the money to the students, so they can get their names in the paper and keep getting re-elected.

Exit question: How many kids in her district could use the funds but were not informed about the program?

Competing with a sound tax policy does a state good

Sharpton: “This is our day and we ain’t giving it away”
Scroll to top