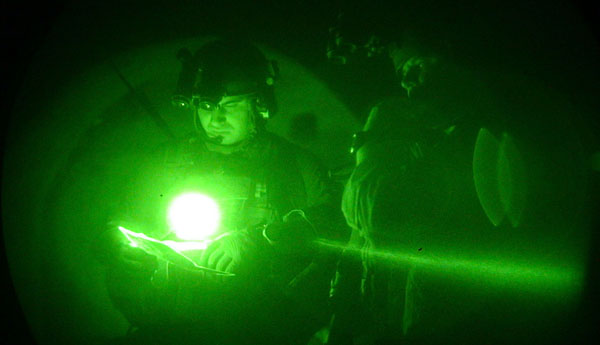 Leif Babin, a former Navy SEAL officer who served three tours in Iraq earning multiple commendations, penned an opinion piece in the Wall Street Journal a few days after the president’s State of the Union address in January dissing the Obama political machine for using successful operations as political cards.

Hat tip to Sister Toldjah who points us to the article in the WSJ. (To view the entire article, you may have to first click here, and then click on the link to the article.) As a reminder, this was written in late January.

America’s premier Special Operations force is once again in the headlines after a team of Navy SEALs rescued two hostages from captivity in Somalia last week. Elite U.S. forces have carried out such operations periodically over the past decade, always with skill and bravery. The difference in recent months is that the details of their work haven’t remained secret. On the contrary, government officials have revealed them for political gain—endangering our forces in the process.

Some talking head on NBC this morning spoke about honor, suggesting we’ll never know which American service member took the shot to take out bin Landen … the team did it … it’s a matter of honor. No talking head, it’s a matter of operational security and the security of the family of special forces members.

They prefer to stay out of politics. They prefer to stay completely obscured by shadows and darkness, and I will always respect that. The Obama political machine on the other hand seem determined to play every political card they are dealt, even if it places the real heros in an uncomfortable, dangerous place.

… highlight[ed] the success the next morning, and Mr. Panetta also publicly praised it. Then came the “anonymous U.S. officials” to provide extensive details of who conducted the raid and how. As with the bin Laden operation, the top-secret unit that carried it out was again front-page news, as were its methods and tactics.

Our special operators do not welcome this publicity. In fact, from conversations I’ve had in recent days, it’s clear they are dismayed by it.

But it’s not about the special operators, it’s about scoring political points even if those anonymous statements put lives at risk. And it is not just the lives of American servicemen and women, it’s also the lives of partners in other countries who have stepped up and risked their own lives to provide intelligence information to the United States and our coalition partners.

In June, Pakistan arrested several individuals who allegedly provided information to the CIA in advance of the [bin Laden] raid. One of those charged with treason was a Pakistani doctor, Shakil Afridi. This Sunday, Mr. Panetta confirmed to “60 Minutes” that Dr. Afridi had provided “very helpful” intelligence to the CIA. That may have condemned Dr. Afridi to death or life imprisonment.

Such disclosures are catastrophic to U.S. intelligence networks, which often take years to develop. Recklessness not only puts lives at risk but could set U.S. intelligence-collection efforts back decades. Our ability to carry out future operations is significantly degraded—something not lost on Pakistan.

A few in the Obama administration publicly complained about leaks.

A week after the bin Laden raid, then-Secretary of Defense Robert Gates expressed dismay about Washington’s loose lips, telling a town hall meeting of U.S. Marines at Camp Lejeune: “Frankly, a week ago Sunday, in the Situation Room, we all agreed that we would not release any operational details from the effort to take out bin Laden. That all fell apart on Monday—the next day.”

Welcome to Chicago-style politics, where any and every card can be played.

Oh no, not again. Obama says there’s this car … but this time …
3 replies