Let’s get something straight. School vouchers are pretty much exclusively supported by conservatives and those who actually want kids to succeed. Those against student vouchers are usually unions and government bureaucrats who complain about dollars being “removed” from public education … where kids are indoctrinated.

The plan is labeled bipartisan, primarily because the legislation only goes part way towards a full voucher system. That said, I support the initiative and hope they would expand the program once the results start coming in. 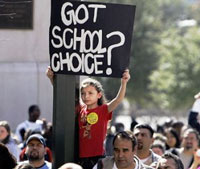 As a reminder, I’m one of those people who think the government should not be involved with educating our kids at all, but I also understand that won’t happen in the near future, so I see vouchers as a step in the right direction to prove my theory.

So, what are the issues with the Chicago legislation? First and foremost, the program as it is written only applies to elementary schools, not junior high schools or high schools. This, I see as a potential problem since some kids may be thrown back into failing schools after success in their younger years.

Second, only kids who are enrolled in the bottom 10 percent of performing elementary schools have the option to apply for vouchers. These facts, should not derail the plan, but I suppose this was the only way they could get together and keep the unions from busing in hundreds of union teachers to complain about the program. What about the kids who fall just above the cut off? No opportunities for them…

You can read a fact sheet about the legislation on the Illinois Policy Institute’s website. Also, James Meeks – a minister and Democratic state senator from Chicago – and Andy McKenna Jr. – former chairman of the Illinois Republican Party – co-authored an op ed piece in the Chicago Tribune on April 21 providing additional information.

Hat tip to Big Government’s Kristina Rasmussen for the pointer … since you’d never guess Chicago would come up with a voucher plan.

Exit question: If they had the opportunity, Would President Obama and and the congress-critters step in to try to kill the voucher program in Chicago like they have done in Washington, D.C.?

On a side note – and maybe I’m being a bit to sensitive on this – I was not too thrilled as to how Republicans were portrayed in the Wall Street Journal’s opinion piece today. When referring to the co-authored op ed in the Tribune…

Mr. McKenna’s byline on that Tribune article suggests an effort to woo Republican legislators, who largely hail from downstate or suburban districts. These state representatives know that at least some of their constituents see vouchers as opening a back door for black kids to come to their schools. The good news is that some are showing courage: Rep. Darlene Senger, for example, who represents suburban Naperville, has come out foursquare for the bill.

Is part of being bipartisan admitting that some of “your people” are racist and you need to find the “courage” to stand up to them? I’ll freely admit there would be a few parents out there who complain about black kids in their school, but this is such a small percentage I think it is inappropriate to even bring it up. Why do we always have to bring race into things?

Obama asks for reform and more CASH for education system