Even with the TEA party. Even with Republican control of the House. Even with the economy in trouble with 9 percent unemployment. Even with the mortgage issues. Our federal and state government moved right on ahead and increased their total spending by 5 percent. How much has your spending increased?

From Investors Business Daily, with my emphasis in bold.

When Republicans took control of the House in January, they pledged to make deep cuts in federal spending, and in April they succeeded in getting a bill advertised as cutting $38 billion from fiscal 2011’s budget. Then in August, they pushed for a deal to cut another $2.4 trillion over the next decade.

Some analysts have blamed these spending cuts for this year’s economic slowdown.

But data released by the Treasury Department on Friday show that, so far, there hasn’t been any spending cuts at all.

Look at the chart below courtesy IBD and note the source data. It’s not from a conservative or libertarian think tank, rather the US Treasury. The total state spending continues to increase even as the federal government becomes more of a safety blanket for the states. This is not good folks, not good at all.

And keep in mind, the current-year federal deficit will easily eclipse $1 trillion, probably more than one-third of the federal outlays for 2o11.

America, we have a spending problem. Quite honestly, I really don’t think putting more Republicans in Congress or taking over the Executive Branch will do much of any good in my lifetime. We must start a complete and total re-construction of the way our federal government works.

Article 1, Section 8. The Tenth Amendment. That is all. 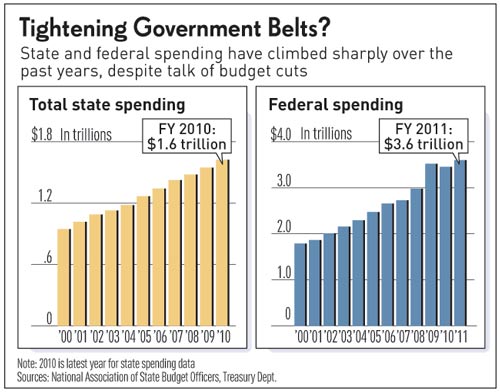 Census Bureau blows $2.5 million on reminder to be counted