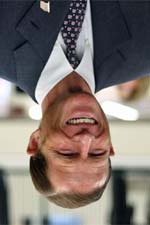 Rasmussen’s latest poll on the Connecticut Senate race gives us the “Tale of the Tape”. Linda McMahon continues to close the gap on the “golden boy”. More telling for crown prince Blumenthal, the leaners are breaking for McMahon. Momentum!

Understand the gap is still big enough, and Blumenthal is still at 50% but even that is down from 51%. A long time political friend of mine once told me when a candidate falls below 50% he’s in trouble. When he drops below 45, he’s toast.

Democrat Richard Blumenthal now holds just a five-point lead over Republican Linda McMahon in Connecticut’s race for the U.S. Senate.
The latest Rasmussen Reports telephone survey of Likely Voters in the state finds Blumenthal with 50% support and McMahon with 45% when leaners are included. One percent (1%) favor some other candidate, and three percent (3%) are undecided. To see survey questions, click here.
The race remains Leans Democrat in the Rasmussen Reports Election 2010 Senate Balance of Power rankings.

Blumenthal once led this race by 30 points and was assumed to have rescued it from the debacle of Chris Dodd.  Linda McMahon was once considered too conservative to compete for this seat, as well as too tied to the circus atmosphere of professional wrestling to build credibility with voters.  McMahon has run a smart, issues-focused campaign, and has also been blessed with an opponent that keeps inflicting his own damage to his credibility and reputation.

Make no mistake, these final 5 points will be tough to make up. But based on Blumenthal’s pathetic performance in his Democratic debate, and his lack of command of issues, that 5 will disappear quickly. Remember this one? Jump ahead to 5:49. The infamous “my lawsuits actually create jobs”.

Come on, Connecticut, get with the program

Smack Down: Connecticut US Senate race a dead heat UPDATE: Let’s get ready...
Scroll to top