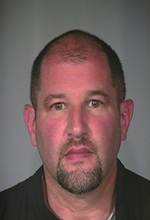 Sooner or later it had to happen but Simsbury? I could see the push back happening. We’ve been blogging on it for two weeks. But I never expected the push back would actually be a … ummm … push back?

The man in question is 51 year old John Christina, a man who has some serious medical issues. Police arrested him yesterday after allegedly punching a TSA agent in the chest. Apparently the confrontation took place after he went through the scanner at Indianapolis Airport and began a conversation with the TSA agent. From the Indianapolis police report.

“HUTMAN STATED AFTER CHRISTINA WENT THROUGH THE AIT THEY WERE TALKING ABOUT MEDICAL ISSUES AND CHRISTINA ASKED HIM A QUESTION. SINCE HUTMAN NORMALLY WORKS IN DAYTON, OHIO, HE STATED HE WAS NOT FROM THIS AIRPORT AND HE WAS NOT FAMILIAR WITH THE PROCESS IN WHICH YOU ARE TALKING ABOUT. AFTER THE CONVERSATION, CHRISTINA “PUNCHED” HIM WITH HIS RIGHT CLOSED FIST IN THE MIDDLE OF HIS CHEST. ACCORDING TO HUTMAN’S WRITTEN STATEMENT AFTER HE GOT PUNCHED IN THE CHEST HE ASKED CHRISTINA “WHY DID YOU HAVE TO HIT ME” AND CHRISTINA REPLIED “I WAS ONLY KIDDING WITH YOU.” THIS WAS WITNESSED AND CONFIRMED BY ANOTHER TSA/TSO NAAMAN DAVIS AND US AIRWAY PASSENGER ALSO GOING THROUGH TSA SECURITY, JOSEPH HALLETT. ALL OF THE WITNESSES PROVIDED WRITTEN STATEMENTS.

I have no idea what was said that touched this off and I am not even going to speculate. He didn’t go through a pat down … but he was screened. I will try to update this.

As for those screen machines, Howard Portnoy, from Hot Air, will be joining us this morning at 10 AM. He put together a great report on the safety of these machines themselves. Apparently the machines radiate well beyond the machine itself.

The agency does not specify whether millimeter wave technology was evaluated or by whom, which seems vaguely unsettling if not suspicious. Nevertheless, the TSA’s bottom line findings are “that the energy projected by millimeter wave technology is thousands of times less than a cell phone transmission” and that “a single scan using backscatter technology produces exposure equivalent to two minutes of flying on an airplane.” (Flying on an airplane produces exposure to radiation? Does anyone else find this less than comforting?)

As to the sources of these claims, note that only one—the Johns Hopkins University Applied Physics Laboratory (APL)—is an independent, non-government agency. (Forgive my cynicism, but the FDA doesn’t have an exactly sterling track record in its capacity as consumer watchdog.) The APL’s report, which is available here, does seem to offer some assurance about the safety of the Rapiscan Secure 1000 backscatter scanner. But it is also contains this caveat:

In short, whether you receive dangerous levels of radiation depends on who set up the particular AIT scanner being used and whether he followed the manufacturer’s recommendations.

And the beat goes on … so to speak.

The TSA goes T and A … or why we saw this coming months ago.

Federal Tax Scofflaws: One Down, Thousands to Go.

Right Scoop: 4 year old sees his baby sister … before she was born
Scroll to top