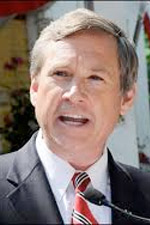 I’ve been wondering why the media has not made a big deal about a Republican winning the Illinois Senate seat once held by The One. Sure, some might say the GOP and Tea Party screwed up an opportunity to snag Joe Biden’s Delaware seat, but come on … where’s the befuddlement?

Just think about this for a moment. Barack Obama resigned his senate seat in Illinois, the bluest of blue states, when he was elected president in a Democrat landslide that seemed to engulf the whole country. It was so tremendous a landslide that many pundits in the chattering classes at the time thought that it was the beginning of a permanent Democrat majority.

A scant two years later, that bluest of blue senate seats went to the Republicans who themselves won a landslide of epic proportions wholly reversing Obama’s great wave election.

Read the full post. I’ll admit, I was not watching the news coverage on election night when Mark Kirk (R-Ill.) beat out the Democrat nominee for the seat, but you’d think the media would note it was a big deal, even after the Rod Blagojevich and Roland Burris kerfuffles. In fact, it was quite the rebuke of Obama and Chicago politics in general.

Ron Clark Kids sing but only Willie gets it

Obama to Business: Ask not what we can do for you … but what you can do for me
2 replies

Debt reduction panel does not deal with the real problem

Christmas Village wiped out in Philadelphia, then brought back
Scroll to top