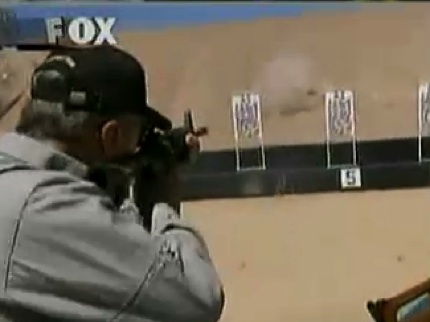 As you may have heard, an 18 year old woman – who had just lost her husband to cancer on Christmas day – was home alone with her three month-old baby when two men were attempting to break into her home. When one of the men broke in, she shot him. Dude was DRT. Fox News anchor Shep Smith actually just asked – in a teaser – if the audience thought she should be charged.

Smith really gets my blood boiling frequently. That’s the most idiotic question you could ask. From CBS News.

Sarah McKinley, 18, reportedly was home alone with her infant son just a week after her husband died of lung cancer, when two men tried to break into her house.

McKinley managed to push the couch to the front door to create a barricade, but that didn’t stop the intruders.

“He was from door to door trying to bust in,” McKinley told CBS affiliate KWTV. “I don’t know what he had in his hand besides the knife. I believe he actually had a hammer in his hand at some point because he was hitting that back door with it.”

McKinley called 911 and was on the phone with the operator during the entire 21 minute ordeal. She even asked the operator if she could shoot the intruder.

There are a few things about the aftermath of this story that bug me, but the one primary issue is the media keeps asking if she did the right thing. Are they kidding? Many anti-gun nuts want us to run away from our own home. Grab the kid and head out an open window to escape. That’s unacceptable in my book. One commenter mentioned that maybe she should have used pepper spray, or build a safe room in her house. Good God.

Then we have the anchors like Smith who explain to us Oklahoma state law allows us to shoot people if they break into your house. Why is this not an absolute given? If the doors are locked and you tell someone to go away and they are trying to forcibly enter the house, guess what?

I’m not too thrilled the media went out to interview McKinley and had her point a shotgun around. It’s possible the young McKinley pulled out the shotgun for a demonstration on her own initiative, but I’m willing to bet a few dollars the media put her up to that.

2nd Amendment court battle - Chicago case to be round two

What We Believe Part 5 - Gun Rights

They Did It ... Update - Bill Congress for commercials

Hostess Twinkies vs. the unions
Scroll to top