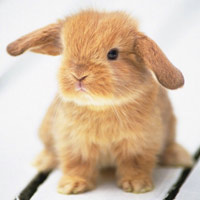 That’s right. I’m putting this right at the feet of the president himself. A family in Missouri has been fined more than $90,000 by the US Department of Agriculture for selling more than $500 of the furry creatures in less than one year. The families profit was a whopping $200 for the year.

If the president can answer a question during a prime-time news conference concerning his friend being arrested in Cambridge and outright stating the “police acted stupidly,” he should be willing to step up and state unequivocally that the US Department of Agriculture has acted stupidly. 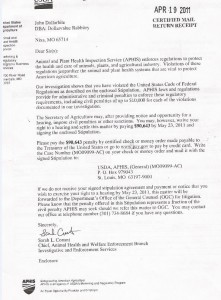 Bob McCarty has the details at Big Government, who links to an original post with additional information at Bungalow Bill’s Conservative Wisdom.

Long story short. The family sold bunnies to individuals, petting zoos and pet shops within the state of Missouri. They started this venture as a learning experience for their son, and although they were selling bunnies for their meat at the beginning, it turned out it would be more profitable – and I use that term loosely – to sell them to petting zoos. At no time was there any suggestion the bunnies were not treated well.

Here comes the United States Department of Agriculture who started snooping around the family home and asking questions. The family states they asked investigators numerous times if there was a problem or some law they were not complying with. The family says inspectors provided no indication they were violating any laws or regulations.

For their part, they government says they were “formally notified on several occasions” concerning the licensing requirements. 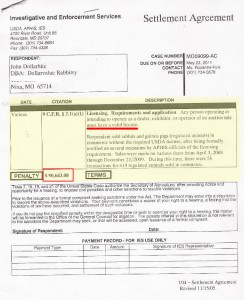 Eventually, Sarah L Conant, chief at the Animal Health and Welfare Enforcement Branch of the USDA sent a letter to the family demanding more than $90,000 in fines – paid in full within 35 days – because they did not have a license with the USDA. Click on the images for to read the letter and demand for settlement.

The business was carefully conducted on the property of their Missouri home;
The business complied with all applicable state laws;
The bunnies were kept in large, clean and well-maintained cages;
and
Not a single bunny was sold across state lines.

Why would the USDA get involved with this?

President Obama signed an Executive Order in mid-January requiring federal departments start a complete review of stupid red tape and excessive regulations that do damage to the economy.

The families lawyer should call Mrs. Conant at the USDA, refer to the president’s Executive Order that was signed 90 days prior to receipt of the letter, and have her immediately rescind the so-called settlement agreement and close the investigation of the family.

Either that or she can shove the letter where the …

That’s what’s wrong with bureaucrats, they are breeding like rabbits.

Netanyahu to Obama: No, Mr President. No return to pre ’67 borders
Scroll to top