Jim will cover this in detail today, but here is the video of the school kids singing praises to President Obama. I’m wondering if they are allowed to recite the Pledge of Allegiance each morning?

UPDATE: Malkin has much more including the name of the school which looks to be B. Bernice Young Elementary School in Burlington Township, New Jersey. Go read Michelle’s post!

Michelle Malkin was right. It wasn’t about the speech Obama delivered to the kiddies. It’s what overzealous Obamabot teachers would turn it into.

I still haven’t found the origin of the video … but its creepy enough on its own. I have added for extra special impact … the kids who sang in California last September. Yummy.

Even creepier … how’s this lesson plan via Michelle’s website, and here is the original full report over at Smart Girl Nation – a must read since it has the rest of the study guide. 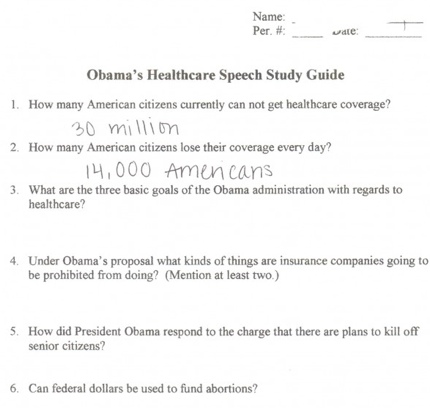 Is this what you voted for?

Update 2 (Jim) Indeed, Steve is right. You should go to Michelle’s site for updates of which there are many including a response from the school district that will I hope, outrage you. But, in the meantime I have added two more videos to the post.

Erik posited whether this might be one rogue teacher. Unfortunately it’s not. And given the NEA’s position on Obama my guess is there are many more. Here’s one.

And if that doesn’t creep you out … maybe this will. It’s the line from Michael York at the end that makes the point the best.

“You still think you can control them?”

Weinergate … interview of the day