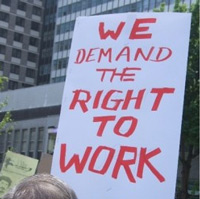 You know how Democrats and liberals are always demanding choice? Sure, except when it comes to the choice an employee has to join – or not join – a union.

They are also totally against school choice vouchers … but that’s another article.

Yesterday’s free-for-all in Michigan was out-of-control, but the law passed in the State House and Senate.

The people of Michigan have spoken, but that did not stop President Obama from going to Michigan on Monday and getting the union thugs all worked up telling them “we shouldn’t be … trying to take away your rights to bargain for better wages and working conditions.” Of course, he lied to the crowd. The Michigan legislation Obama is taking about did not take away rights to bargain for better wages.

Right-to-work should really be called right-to-not-join-a-union. Before today, employees with union shops absolutely had to join the union wether they wanted their representation or not. They were forced to join. Forced to pay dues.

That all ends in Michigan, where workers are free to choose if they wish to join the union or not. The unions have a problem with this – hence all of their thugs taking swings at people and destroying private property yesterday – because current members will drop out since they are doing harm to employment opportunities for everyone in Michigan.

It’s not about politics, it’s not even about the economy for these union cronies. They want their big-dollar dues.

As defined in Wikipedia… with my emphasis.

A right-to-work law is a statute in the United States of America that prohibits union security agreements, or agreements between labor unions and employers that govern the extent to which an established union can require employees’ membership, payment of union dues, or fees as a condition of employment, either before or after hiring.