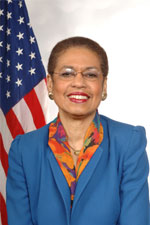 I’m not surprised at all. I’m not exactly certain if a call like this is illegal or an ethical issue, but last night, Big Government posted a voicemail to a reported lobbyist left by Rep. Eleanor Holmes Norton (D-D.C.) looking for a donation. Another symptom of the disease that leaves a bad taste in your mouth does it not?

Big Government notes Democrats are pushing representatives in safe seats to get more donations so they can spread the funds around. Their post also has a good review of the laws and ethics issues that may be involved here. Go read it.

The pressure is especially strong on members from “safe” districts, who need little campaign money of their own to win reelection. The catch, though, is that many of these members haven’t amassed vast campaign war-chests, for the simple reason that they haven’t needed them. So, they are scrambling to meet their Pelosi-imposed obligations. Holmes Norton is from one such “safe” district–the District of Columbia.

Head over to Big Government to listen to the call, but here is the voicemail transcript…

This is, uh, Eleanor Norton, Congresswoman Eleanor Holmes Norton. Uh, I noticed that you have given to uh, other colleagues on the Transportation and Infrastructure Committee. I am a, um, Senior Member, a twenty year veteran and am Chair of the Sub-committee on Economic Development, Public Buildings and Emergency Management. I’m handling the largest economic development project in the United States now, the Homeland Security Compound of three buildings being built on the uh, old St. Elizabeth’s hospital site in the District of Columbia along with uh, fifteen other, uh, sites here for, that are part of the stimulus .

I was, frankly, uh, uh, surprised to see that we don’t have a record, so far as I can tell, of your having given to me despite my uh, long and deep uh, work. In fact, it’s been my major work, uh, on the committee and sub-committee it’s been essentially in your sector.

I am, I’m simply candidly calling to ask for a contribution. As the senior member of the um, committee and a sub-committee chair, we have (chuckles) obligations to raise, uh funds. And, I think it must have been me who hasn’t, frankly, uh, done my homework to ask for a contribution earlier. So I’m trying to make up for it by asking for one now, when we particularly, uh, need, uh contributions, particularly those of us who have the seniority and chairmanships and are in a position to raise the funds.

I’m asking you to give to Citizens for Eleanor Holmes Norton, PO Box 70626, DC, 20024. I’ll send you a follow-up note with appreciation for having heard me out. Thanks again.

Isn’t it interesting the media and the left has been hounding Rep. John Boehner (R-Ohio) about his connection to the tobacco lobby and handing out PAC money on the floor of the House – again, legal … but leaving a really bad taste in your mouth – yet Holmes Norton has gotten a pass during the first 24 hours of this story?

Don’t like any of it from the Boehners or Holmes Nortons of the world? Don’t you dare start going tit for tat in the comments section. But Republicans do it … yeah but Democrats do it more. BORING!~

Take the money and power away from them and bring that power and control back to the states and the people. US Constitution: Article 1, Section 8, the 10th Amendment. The answers are right there in front of all of us.

Reminder: Most people are conservatives

Cavuto to Rosa DeLauro: I have no idea what you are talking about
Scroll to top