I’m no expert on international law, but it looks like these Somali pirates can attack at will and if the country of the attacked ship does not want to prosecute the criminal offense, they just let them go … most likely after a couple really good meals and medical attention. 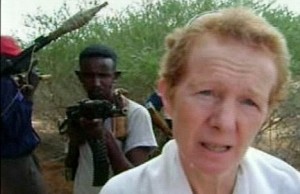 Where is the deterrence? If these guys are attacking with RPGs and rifle fire, what’s the problem with having a Predator drone send a single Hellfire missile right into their crappy boat? If they want to play the game, they should be familiar and comfortable with those rules. Since it is very unlikely that will happen, the Somali pirates continue their brazen attacks, with little worry they will be killed or sent to jail.

As a reminder, Rachel and Paul Chandler have been held hostage by Somali pirates since Oct. 3 – six months. Unfortunately, the British Royal Navy directly witnessed the attack and kidnapping but was unable to keep the pirates from heading to shore with the Chandlers.

A U.S. Navy ship has sunk a pirate “mother ship” in the Indian Ocean and captured 11 pirates, and then promptly let them go.

It was the second time within 24 hours that U.S. forces captured Somali pirates. Earlier Thursday, five pirates were taken into custody after they attacked a U.S. warship.

While those five pirates remain in custody, the 11 captured Thursday were allowed to leave in small skiffs after the mother ship was sunk. The action prompted a Pentagon spokesman to deny that the Navy had a “catch and release” policy regarding pirates. …

The MV Evita avoided being boarded by increasing its speed and firing flares, according to a press release by the Combined Maritime Piracy Task Force.

After the ship’s captain radioed for help, a Swedish patrol aircraft spotted the pirates and the USS Farragut dispatched its own plane to monitor the situation until the Navy ship could arrive.

The planes watched as the suspected pirates threw ladders and other equipment into the ocean, which was enough to convince the Farragut that the suspects posed no more pirate threat, although they were still found in possession of grappling hooks, according to the task force statement.